Vegan Berry Bundt Cake Recipe. Before you read any further, in case the pictures are not informative enough, this is for mini-bundt cakes.

Imagine a simple vanilla scented sponge, studded with fresh raspberries and blueberries. Doesn't that sound delicious? Now imagine that as a "two minute to whip up" batch of cakes. Sounds irresistible!

What are Bundt Cakes?

Bundt cakes are not a specific cake or recipe, but instead refers to the tin that it is baked in. A Bundt tin is a round tin with a central pillar, giving you a distinctive hole in the middle of the cake. The tins come in many intricate patterns.

The word "Bundt" was trademarked by Nordicware (who produce some of the most beautiful cakeware), but this trademark is strictly limited to a cake tin. Therefore, you can happily call your bakes Bundt.

The exact etymology of the word "bundt" is not known for sure; however, it could come from the word bund, meaning a bundle of wheat, or it could also refer to bunch, the shaping pattern on the edge of the pan. In parts of Germany, they also refer to Kugelhopf cake as Bundkuchen, combining the words bund and cake. Either way, the word first appeared in print at the turn of last century.

My mini or baby bundts are a simple vanilla batter, studded with jewel-like berries, blueberries and raspberries, staining them in the most beautiful way. I left mine un-iced as they are quite sweet, but feel free to add a simple water icing if you want to make them look a little more posh!

If you don't have mini bundt tins, you can just as easily use a lined muffin tin.

The easiest cakes in the world to make! 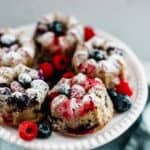