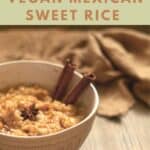 Vegan Arroz con Leche - If you love rice pudding but can't be bothered to put the oven on to bake one for three hours, try my vegan Arroz con Leche, a simple, sweet rice dessert cooked right on the hob, ready in less than 30 minutes!

My Mum made the best rice pudding. It was thick, sweet and enriched with evaporated milk, baked in the oven until a thick, chewy skin formed. I would eat it, with more sweet milk poured over it, bowl between my knees, reading Chalet School stories.

Sadly, vegan Rice pudding is just not the same. Non-dairy milk seems to give the rice a decidedly cardboard-y taste which is not really to my liking.

Why is Arroz con Leche so Delicious?

There is hope, however, in Arroz con Leche (literally rice with milk), a traditional Spanish celebratory dish, that uses coconut milk and is deeply spiced with cinnamon, ginger and cloves.

The kicker? It's cooked on the hob, not baked in the oven, so that the rice remains creamy and soft, but more importantly, is ready in just about half an hour.

Inspired by my easy mango coconut sticky rice on this site, or try my delicious New York style cheesecake.

Gently heat the milks, sugar and spices until just simmering

Add the rice and simmer until tender

This dessert is just so simple. Heat the milks, sugar and spices until just simmering and amalgamated.

Add in the rice, stir gently, and reduce heat to a very gently simmer. Stir periodically to ensure that it isn't sticking.

Hint: because of the nature of risotto rice, it does tend to stick a little towards the end of the cooking time, so do keep an extra close eye on it.

You can change this dessert up a little to suit your guests.

I like to use a small saucepan to cook this in, but one with a heavy bottom. I like to leave the rice gently to cook whilst I do other things, and I need to trust the pan I'm using. I love this Kuchenprofi pan which has a clad bottom to avoid sticking and burning.

Refrigerate for a couple of days and gently reheat in a saucepan when required.

Not suitable for freezing.

I have found that some coconut milks cause a little bit of extra oil towards the end of cooking, so try and find a low fat coconut milk if you don't like the idea of this. 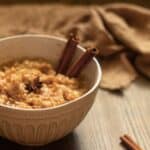