Vegan apples in the French style recipe. This is a quick, informal dessert, adapted from Nigel Slater, and which I have renamed Apples in the French Style A La Mode. It is simply apples cooked in a brandy sozzled syrup, served over warm croissants, topped with your favourite vanilla, plant based ice cream.

I was so happy to see the Pret a Manger vegan croissants in the freezers of my local Tesco, but if your local store doesn't stock these, the ones that Pillsbury do in a can are also vegan!

I love this vegan apples in the French style recipe because it tastes so chic, so Parisienne and is a quick, easy vegan dessert.

What Are The Best Cooking Apples?

I use Bramley cooking apples because they have the best flavour and retain their shape during cooking. Also, you get a lot of apple for your buck with these huge cooking ones!

I don't recommend eating cooking apples raw as they are quite tart, and taste quite different to smaller eating apples, however they are so perfect for baking or cooking. However, some cooking apples do tend to leach a little more liquid than eating, or can go a little "foamy" when you first start to cook them. This can cause the infamous soggy bottom in apple pies!

However, because we are simply cooking them in a buttery, caramelly sauce, we don't need to worry too much here.

If you only have eating apples in your fruit bowl at home and can't be bothered to go and find some Bramleys, don't worry! These will be just fine. You may need to use a couple more, as they are much smaller than cooking apples, and they make take a little longer to cook down, but they will work fine.

Do not use crab apples. These are really best in a jam or chutney, where they have been cooked down slowly with lots of sugar and other flavourings to minimize the deeply astringent flavour.

How Do I Make Vegan Apples in the French Style?

Yes! And no. Traditionally, croissants are made with a butter-rich pastry and brushed with butter to give them a rich shine. However, Pillsbury crescent rolls are accidentally vegan, and Pret a Manger have recently produced a range of pastries in the freezers, including vegan croissants (only available at Tesco stores)! Another UK brand, La Boulangere (seen in Sainsbury), also do a decent range of vegan pastries, including croissants and brioche buns. These proprietary pastries have simply replaced normal butter, with vegan ingredients, so you still have that familiar buttery croissant deliciousness.

For another simple but sophisticated sweet, click here for my vegan Florentines recipe. They would be delicious served alongside this! 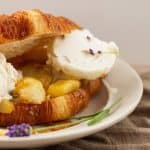