Vegan Macanese Minchi recipe. If you are after comfort food that is a little bit different to the norm, tastes great and is ready within 30 minutes, Macanese Minchi could just be it!

I have mentioned a lot about how I love 30 minute meals. Is it because I'm lazy? Well, yes, but more greedy than lazy, and I love to think that, after a busy day in the office, I can be sitting down in front of some random YouTube nonsense watching icebergs about true crime. Note: if you're reading this in 10 years time, icebergs may no longer be a thing. Consult wiki if confused.

What is Macanese Minchi?

Minchi, as you might think, is derived from the word "mince", referring to the minced beef or minced pork element. It has strong Portuguese elements, but is one of the most well-known recipes in Macau. There is a delightful story about a Portuguese man requesting his Chinese wife to prepare him some classic western food such as burger and chips. His description was interpreted, incorrectly but no less successfully as Macau Minchi, and that's the version that has stuck. Frankly, I would rather eat Minchi than burger and chips!

Normally, Macanese Minchi would be served with rice and a fried egg. Obviously we would omit the egg, but it is delicious with rice. Because it is an all-in-one dish, you could just serve it on it's own. I think it goes really well with some greens too though, like kale or green beans.

It stands to reason, that with such simple ingredients, this delicious Minchi dish should be easy to veganise, and indeed it was, although I couldn't find any veganised versions online, so decided to formulate my own.

You can do this in two ways:

Try my other vegan supper dishes 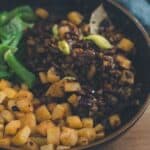 To make the diced potatoes

To make the Mince