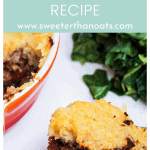 Shepherd's Pie is an old English dish. If you are British you will have always been served Shepherds Pie as a child (or a vegetarian variant of it, if you are a non-meat eater). At Primary school we were served up synthetic mashed potato served on top of a grayish brown meat sauce (origins of meat unknown), padded out with marrow fat peas and tinned carrots. I still shudder at the thought of it. I remember on more than one occasion unscrewing the lid of the ketchup dispenser so that when I went to squirt 'just a little' tomato sauce on my plate, everything was flooded with watered down sauce. "Miss, I can't eat this, it's covered in ketchup!"

My first culinary Get Out Of Jail Card.

What is Shepherd's Pie?

The true origins of Shepherds Pie (or Cottage pie) go back even further than my own schooldays (and that was sometime in the 1980s!), although it is not as archaic as I had expected. Of course, the Spanish brought potatoes to Europe in the 15th century but those choosy Elizabethans and the so-hard to please Jacobeans chose NOT to utilise the humble potato (or any vegetable for that matter), preferring the higher protein meals.

Technically it is not a pie; it doesn't have a pastry crush and is not baked in a pie tin (although it could be). It is simply a layer of rich (plant based) meat sauce, topped with creamy mashed potatoes. Whilst you can make this dish as luxurious as you like, it is a one-pot meal that sprang out of the need for frugality. In the olden days, leftover meat from the Sunday Roast would be finely ground to make the saucy layer, made to go further with leftover carrots, turnips, parsnips, whatever.

Whilst researching this dish, I asked my American friend if they ate Shepherds Pie in the US, to which I was given a dubious "yeeeeeah" which means something like "I don't know but I'll say yes because it seems like something we might eat".

Actually, a cursory glance on Google reveals any number of transatlantic variants, a scary number of them using the ubiquitous mushroom soup and green beans that Americans seem to love so much, some replacing the potato with sweet potato or even noodles, others pepping it up with chipotles.

Do a search of English recipes and they are all much the same as each other, very little wavering from grandmas original recipe. I'm not here to state which is right or wrong. I think that creativity is the mother of invention and all dishes naturally evolve, regionally, culturally and financially.

My vegan version of Shepherds Pie is, for the most part, traditional apart from the use of vegan minced meat substitute instead of lamb or ground beef. Whilst a traditional shepherd's pie is a thing of beauty, a vegan shepherd's pie is nourishing and soul-satisfying. It is the ultimate comfort food for the whole family.

And, with a tip of the hat to the late Gary Rhodes, from whom I copy his scalloped shaped topping, the final dish was particularly auspicious. The potato had crisped on top but was still fluffy beneath and the sauce had dyed the potato with it's oily goodness. And as for the vegan lentil sauce? Rich, dense and delicious.

How to make Vegan Shepherd's Pie

I find that the best vegan shepherd's pie is prepared the night before, and I usually prep my sauce one day, and then make the potato the next day. It gives the sauce time to chill and all the flavors to mingle.

Firstly you need to make your "meat" sauce. I actually use a lentil filling.

Secondly you need to make your mashed potato (see below). You can make this whilst your sauce is gently simmering away.

Try my other Vegan Supper Dishes 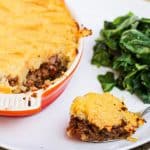 To make the Lentil Sauce

To Make the Mash Potato Topping