Delicious vegan moussaka recipe. Much like Italian cookery, Greek cuisine is entrenched in history. It is lovingly prepared and enjoyed with such gusto that visitors to Greece cannot help but be entranced by their simple, delicious meals.

In a hot country like Greece, the climate dictates much of the food so there are cooling yogurt drinks, spiked with fresh or dried mint to sooth, fresh salads made with sun-ripened tomatoes, thirst-quenching watermelon and salty feta. Desserts come in the form of rosewater drenched cakes or multi-layered pastries like Baklava.

Possibly the most famous Greek dish is Moussaka. Once a mainstay of 1970s restaurants, the dish is rarely seen over here nowadays, except as a ready-meal in your local supermarket freezers, relegated to that regretful footnote in British cuisine known as “out of fashion”, along with Arctic Roll, Lasagne and Melon Balls.

Moussaka (from the Arabic musaqqaa meaning “chilled”) is a many strata-ed dish, layers of eggplant, combined with a creamy béchamel sauce, with complex flavours running throughout. The 'meat' sauce layer, heavily seasoned with Allspice, Cinnamon and Honey, yet none of these strong spices are overwhelming. The result is, conversely, deeply savoury and would work as a wonderful ragu with pasta if you didn’t want to go to all the trouble of making the Moussaka.

Other than the apple pie spices, what is unusual about Moussaka is that it should be served, like revenge, lukewarm or even completely chilled (hence the origins of the name). In fact, it makes total sense. All the flavours vie for attention when eaten straight out of the oven, when cool, they start to mingle and meld in the most delightful way – a true meeting of minds, or at least, ingredients.

What ingredients are in a Vegan Moussaka?

Well, for those of you unlucky enough never to have been to Greece (that’s me too!) and/or try Moussaka, it is notable for its additional layers of fried eggplant slices and boiled potatoes.

And then there’s that wonderful, soufflé-like cheeze sauce topping, the creamy blandness of which ties all the other ingredients together. Traditionally stuffed with Gruyere or Mozzarella, I have replaced the dairy sauce with my favourite non-dairy cheese sauce, made from coconut milk.

Now, you’re correct when you think that this is a slightly labour intensive dish. But it is well worth the effort and it is certainly best prepared at least the day beforehand, the ragu can be made several days ahead, left to cool in a baking dish. This is just as perfect for a mid-week supper as it is for a special occasion.

Also, it is versatile. No aubergines (eggplant) in the store? Then use courgettes (zucchini). You can omit the potato layer if you’re not too keen. You can make a colourful dish by layering potatoes, courgette, aubergine AND the ragu, or you can keep it simple. As with Lasagne, you must make this to suit your time-schedule but most importantly, your palate. My vegan version of a traditional moussaka recipe is so full of flavour, you will not miss the meat sauce at all! It is the perfect comfort food and I think it's a bit like the Greek equivalent of Lasagne or shepherd's pie.

How do you make a Vegan Bechamel Sauce?

How do you make Vegan Eggplant Moussaka?

I like to make the ragu of this classic greek dish first. This is very simple to prepare, and can be made well in advance, and even frozen until you are ready to make the Moussaka. 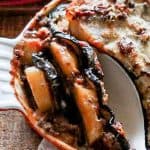