Easy vegan Biscotti recipe. Just like the original, my vegan biscotti are crisp and full of great flavors like lemon zest, dark chocolate and pistachio. They dip perfectly in an espresso or make a lovely gift in a jar tied with string!

I suppose it’s fortuitous for me as a writer that food holds many happy reminiscences for me. The banana splits of my childhood were converted to the taste of freshly ground coffee, my mum's impecunious Spaghetti Bolognese, and my grandmother’s coffee cake.

Since my first visit to the US, back in 2001, I also had a whole world of foodie firsts: thanksgiving meals and apple cake, richly covered with Kool-Whip, thick fluffy pancakes, and hash browns. This is without making note of Cheetos, Nila Wafers, and Saltines. These road trip essentials are available over here in exclusive delicatessens, along with Krispy Kreem Donuts, priced up to the point where they are no longer a cheap road snack but an unnecessary luxury instead.

Of all the great culinary discoveries made by myself in the US, the Coffee Shop with its endless shiny counters stacked high with glass jars filled with cookies, plates gleaming with fruit tarts and, my most favourite coffee house treat of all, the Biscotti, was awe-inspiring. Nowadays, Biscotti is as ubiquitous in a coffee shop, as a cream tea is in high summer.

In Italian, Biscotti translates as “biscuit twice cooked” (bis-cotto) and no word could sum up the Biscotti more succinctly than that. A stiff sort-of cookie dough is made, flavored with almost any conceivable (and some inconceivable, no doubt) ingredients, then formed into a Ciabatta loaf shape, baked for about 30 minutes, then cut into thick slices with a serrated knife into the familiar Biscotti shape – and baked once again for another 10 minutes on each side. What this double bake produces is a hard, crisp biscuit, perfect for dipping into your morning coffee.

The Italians don’t call these hard biscuits Biscotti though. In Italy, Biscotti is a generic term that refers to any biscuit, from Amaretti to Pignoli Cookies. Instead, the twice-baked biscuit, a specialty of the Florence region, is called Cantuccini and supermarkets often carry these imported Italian cookies, often studded with almonds or half dipped in chocolate, which melts as you stir your coffee with them. They are also served as an after-meal treat, to be dipped in Vin Santo or sweet dessert wine or liquor.

Biscotti or Cantuccini are simple to make, although a little more labor-intensive than the usual drop cookies. However, the dough is easy to work with and they are so adaptable, that you will probably find yourself baking them often (in her book, Great Cookies, Carole Walter even has a Passover recipe, using Matzo meal instead of flour). And, despite the initial reservation of tasting a dried-out biscuit, they are incredibly moreish, particularly when half dipped in hot chocolate. They also have the bonus of lasting quite some time in an airtight container or biscuit jar.

Such is the popularity and adaptability of this nibbly biscuit that there are at least twenty cookbooks devoted to just the Biscotti, thousands of jars stuffed full of them in cafes throughout the world and most supermarkets even produce their versions. Not bad going for a hard biscotti.

Perhaps we are in love with the romantic Italian notion of turning something boring into something magical, merely by dipping it into a cup of hot coffee or chilled wine but whatever the reason, this alchemical biscuit is a worthy addition to your baking rota and will accommodate whatever ingredients you have available. You can dress them up or down, and they will always make a welcome gift at any time of the year.

How do you make Vegan Biscotti?

This is a basic vegan biscotti recipe using chocolate shavings, nuts, and cranberries. Using this recipe, you can switch any of the flavorings around, using dried fruits instead of chocolate, brown sugar instead of white, add a dash of vanilla or almond extract, and dip them in chocolate or icing. You could use a little cornmeal in the mixture or make a heavily spiced Cantuccini with ground cloves, cinnamon, cardamom, or ginger. I have seen them dipped in melted chocolate and then red and green sugar sprinkles for Christmas. You could utilize a similar theme with white and pastel sprinkles for wedding favors or a baby shower.

Traditional biscotti cookies are heavily flavored with lemon zest and have a strong almond flavor, but you can stuff them with your favorite flavors to make vegan biscotti cookies to rival those found in your local coffee shop.

Note: I use a vegan egg replacer which works really effectively. I don't recommend using a dairy-free yogurt or apple sauce to replace the egg element as you need a dry dough. 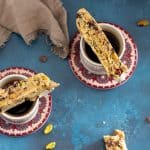