Vegan Walnut Pear Brownies. Rich, dark, fudgy, chewy vegan brownies, studded with little bites of ripe pear and crunchy walnuts. They are everything that is right with the world.

Try my other delicious vegan treats

Possibly the most perfect of all the ways to indulge in Theobroma Cacao. I have never met a brownies that I don't like yet, but I do tend to stick with traditional recipes. This one is a little different to my usual type of Brownie, utilising fruit that I had leftover in the fruit bowl, going a little bit sad and wrinkly (aren't we all?), and walnuts, which are my favourite nut to stir into a brownie!

The chocolate hit in a well-made brownie is so strong it can feel like you’ve just downed three double espressos in less than 10 seconds flat. And there’s the non-prep side of things. It takes no time at all to whip up a batch of brownies and even less time to devour them.

The only difficult part is deciding how you're going to pimp your brownies...and how difficult is that? Of course, there is a down side to such a simply wonderful cake. Brownies don’t really look like much other than brown, heavy, stodgy bits of brick. But think again! Therein lies within a simple, evil genius. People unfamiliar with the Brownie may overlook it once, but once bitten, never again shy.

The characteristics of the brownie, whether it’s chocolate or otherwise (blondies also exist and are just as yummy) is that moist, almost undercooked middle that takes very little time to get used to. This is where I always have problems. 9 out of 10 of my brownies are nearly always under or over cooked. I adore that squidgy middle so much that I have strong reservations about leaving them in the oven for the stated time in the recipe. Veganising Brownies add a further tricky element: without eggs of dairy, I am not so sure if that cracked top is even possible.

I am not worried about if my brownies are over or undercooked. Whatever. If they taste good, that is all that matters. And an overcooked brownie can be redeemed with a little warm-up in the microwave and a dollop of cream or vanilla ice cream, melting all over.

Why Is This Vegan Brownie Recipe So Special?

This particular recipe was an anamoly. As part of a foodie community that I belong to, we all decided to bake our own brownie recipes, and then photograph them. A culinary and artistic challenge if you will. I had a pear going very wrinkly (no one wants a wrinkly pear) in my fruit bowl (the innuendo gets worse) and a bunch of walnuts, and so I decided to add these to my own brownie recipe. What makes this my own? I add a hint of almond extract. It adds a sophistication to the otherwise relentlessly chocolate flavour.

So, I whipped up my mixture in no time, and set my timer for 5 minutes less than usual, I didn't want goo, but I wanted a gently ooze. In the oven they went.

The heralding of my timer signalled me racing to the oven: not a minute longer than needed for these babies!! I plunged the knife in the middle to check just how gooey they were: not much goo. Ahh well. These were a 9 out of 10 for flavour and a 5 out of 10 for brownie idiosyncracy. 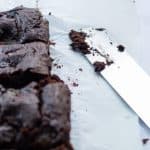