Vegan Agave Syrup Linzer Cookies. Crisp and buttery little cookies, sandwiched with your favorite jam and dusted with a wintery blizzard of icing sugar. The holidays would not be the same without my vegan Linzer Cookies!

As someone who suffers from food intolerances, I am always trying out new ingredients that might make life a little bit more comfortable for myself without compromising flavour. And, if that ingredient comes from a natural source rather than a chemical one, then all the better. I also love vegan Linzer Cookies.

What Is Agave Syrup - A History

Agave Nectar comes from the sap produced in the heart of the Agave Plant. The plant is crushed and put through a process which extracts the syrup in its raw form. It is then filtered and heated to a level which breaks down the raw sugar into fructose. At this stage, the syrup can be further refined to produce a pale amber colour or bottled as is, in the dark, rich chestnut colour.

There are also different genuses of the Agave plant, very much like honey, which infuse the syrup with floral or vanilla top notes. Like Maple Syrup, Agave Nectar comes in various patinas and flavours, all of which have different properties in cooking but with a less aggressive taste than synthetic sugars. This is great for people like myself, who can taste saccharin a mile off. No chemicals whatsoever are used in the production of pure Agave Nectar.

When you try Agave Syrup neat (probably like me, with your finger stuck in the bottle because you’re not ladylike enough to use a spoon), you will see that the flavour is a rare hybrid of honey and maple syrup but much finer than either. It is 25% sweeter than granulated sugar but it doesn’t have an eye-wincing, tooth-cringing sweetness when you sample it.

Despite being clinically sweeter than sucrose, it has no more calories, which basically means you can use less of it in cooking to a similar or identical effect. The texture of Agave Nectar is thinner even than maple syrup which also makes measuring somewhat less of a sticky process than getting all gummed up with honey or golden syrup.

So, with that in mind, I made some Agave Syrup Vegan Linzer Cookies instead, replacing the usual caster sugar with Agave Syrup. I prepared some plain biscuits (which I then dusted in Icing Sugar - obviously diabetics would omit this stage), and some Linzer Cookies which I filled with homemade Greengage, Damson and Crab Apple Jam.

Also known as Empire Biscuits, the Linzer, is a sandwich cookie, made from a rich dough, like a crumbly shortbread, and sandwiched together with jam. The top cookie traditionally has a shape stamped out of it, so you can see the jam popping out through the window!

A traditional Linzer Cookie dough is enriched with butter and often an egg yolk. This gives it the unmistakable short, crumbly texture.

My version replaces the butter simply with vegan butter and omits the egg yolk.

If you do plan on using Agave Syrup instead of regular sugar, expect it to be a little hit and miss, particularly in baking, so take into account the following:

So, my recommendation to anyone wanting to experiment is just to be extra vigilant watching the oven and not to be too upset if your buns come out flat or your cake collapses, you’ll simply know next time to adjust it. Here is the recipe for the shortbread in the meantime. 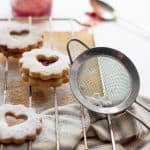