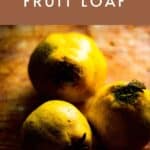 An unusual and unassuming looking fruit loaf, but the magic fruit? The Autumnal and majestic quince, delicately enhanced by cardamom.

This gentle, unassuming looking quince and cardamom loaf cake is certainly perfect to have on a chilly Autumnal day with a cup of tea, but if you replace the quince with the less seasonal apple, you can enjoy this all year round!

This was inspired by my super easy sultana loaf and my vegan banana loaf.

Nostradamus: “(the colour of a Quince) is so diaphanous that it resembles an oriental ruby”

I have a great love and admiration for the ethereal Quince. It is like love, fleeting and impossible to describe. With its exotically perfumed scent, reminiscent of the South Seas, it is not hard to see why it is considered the fruit of love.

In Ancient Greece, a virgin bride would delicately nibble a Quince to ‘perfume her breath’ on her wedding night. Paris presented Aphrodite with a Quince as a symbol of love, marriage and fertility, little wonder when you consider the bottom heavy, fertile shape of the fruit.

A (very) brief history of Quince

But the Apple of Gold was not just used for love. During the Quince-Baldarian War, fought in Biblical times, the fruit was filled with stones and lit on fire – a sort of modern-day hand grenade. The Baldarian soldiers were finally defeated, after attempting to take over Quince land (owned by King Georgio Quince) and legend has it that the Quince fruit was named after the King and became forever a symbol of strength and intelligence within that noble family.

The word Quince is also derived from the Greek, Kydonian Malon, meaning Apple of Gold, so it can be considered the fruit with the most interesting and puzzling past, truly a legendary fruit.

Along with the fig, the quince is one of the oldest fruits in the world and it has been suggested that the sinful apple that Eve tempted Adam with, in the Garden of Eden was in fact a Quince. They certainly have a seductive shape, almost egg shaped, but smooth and firm, like the medieval Madonna’s bosoms in paintings from the Middle Ages.

Apples and pears are related to the quince, though it is more likely that they have evolved from the quince. The texture of a poached quince, with its slightly grainy feel on the teeth, is similar to that of a pear.

It was the quince that was originally made into what developed into modern day marmalade: marmalada, derived from the Greek word for preserved quince, melimelon.

It has an outstandingly high pectin content, hence the production of membrillo, or quince cheese, which is a firm, almost chewy preserve, cooked for a couple of hours, then laid out in the warm sun to dry out. It is then cut into squares and served with savouries or as a sweet pastille, tossed in sugar.

I encountered quinces first hand many winters ago, after reading so many delightful recipes and stories about them. They were for sale in a local supermarket, outrageously priced and imported from Central Asia (they are the fruit of the Cydonia Oblonga) and warm Mediterranean countries where they are much revered.

I didn’t actually cook them but made quince brandy (or Eau De Vie De Coings) with them, mostly because they had started to turn brown. I didn’t want to waste the precious quinces that only appeared on the shelves for about a fortnight each year.

The quince has a heady apple-like scent, but more complex, with undertones of apricots and exotic fruits like mango and pineapple suggested, particularly during cooking process.

There are so few quince trees left in England that actually fruit and are not just ornamental, that to be given some from a windfall is a real gift. They were first noted in English records dating back to the 13th Century when they would have been brought over from Spain. Due to the cold weather in Britain, they only fruit when the weather here is particularly tropical.

This week I was given five beautiful specimens, all from an English country garden, each weighing nearly a pound each. To smell them, freshly picked, is like breathing in the aroma of a letter that was once perfumed, a memory of a scent but as they warm up in your fruit bowl, they start to fragrance the whole house.

How are Quinces used?

Quinces are used widely in the Middle East, where they grow freely (and where most of the quinces that we see in the supermarkets are imported from). They are used in savoury dishes, in much the same way as say, squash or pumpkin, but with a much more mysterious flavour. They hold their shape well in slow cooked dishes and are particularly delectable in stews.

Several quinces can go quite a long way. I recently prepared membrillo using two fruits that had started to go brown and I needed just one to add a haunting whisper to this cake.

The quince is the only awkward bit of the preparation of this cake but the whole thing still only took about half an hour or so to get oven ready. There are two ways you could choose to do the quince:

2) Peel the quince first, proceed as above but do not puree. Instead cut the slithers into 1cm pieces so that the cake will be dotted with the ochre tinted fruit.

Top, tail and core your quinces, cutting them into thin slices. Poach in a little water with a teaspoon of sugar from the recipe.

Once tender, place in a blender (removing the sultanas) and blend to a lumpy puree. Leave to cool.

Sift the flours, baking powder, cardamom, salt and bicarb into a large bowl.

In a separate bowl, cream the remaining sugar and butter until light and creamy, then fold in the quince puree and sultanas.

Alternately fold in the flours and yogurt into the butter/sugar mixture until you have a thick cake batter.

Spoon into your lined loaf tin and bake for 40 minutes at 180c.

Hint: if you find that you love the taste of quince, it's well worth buying some more, making the puree and freezing it in batches so you can enjoy the magical flavour all year.

I use a vintage 1 litre loaf tin.

Once cooled, store in an airtight cake tin or container. No need to refrigerate. It will be good, and in fact get better, after a couple of days.