This recipe came to me via the wonderful late illustrator and blogger, Buel Almquist-Lee, who wrote so eloquently about the need for a little sweetness in our lives. Buel passed away earlier this year, and I was saddened that the world had lost such a unique, generous and artistic soul. I first got to know her back in 2008, when I started my first food blog. I was in awe of her brilliance, and her ability to paint a picture, with not only paints, but with words also.

When I was compiling my vegan cookbook, she generously contributed her artwork to my book, I am not sure that she ever got to see the finished book, and so I a hope that I can keep a little of her memory alive by sharing some of her artwork here. In her own idiosyncratic way, Buel wrote so evocatively about her white bean blondies:

Generally acquainted with the macrobiotic principle of balancing expansive and contractive forces in cooking, this idea especially became clear: sweets have an open, uplifting quality. As do simple carbohydrates, joy, and laughter. With the brute attack on my diet {removing sugar} and eventually other ways of being, I settled into a seriously contracted place. Every rule and should-not added atop every indulgence departed, allowed the pattern of school marm consternation and rigidity to ripple through me, leaving me small, colorless and pinched. While it may be misleading to say that sugar is the lynch pin that makes my life run well, I’ll just conclude that bright open skies make a good companion to the dark terrain below. Blondies have sentimental value. I love the contrast between vanilla with a hint of butterscotch, against the chocolate. Moist, almost fudgy, but still utterly winsome. I thought these were interesting and wholesome in a balanced even slightly virtuous way. The right amount of expansion with contraction!

Note: I have removed the egg element and added some coffee to give a mocha flavour. I also replaced the flour to make them gluten-free (and for the oatmeal intolerant).

Why do people use beans in blondies or brownies?

What is the Texture of a Bean Blondie or Brownie Like?

So, the texture is very fudgy and quite dense, certainly less cakey on account of their being a little less flour used than regular brownies. These white bean blondies are also gluten free, and that adds a different texture to baked goods as well. Of course, you can replace the gluten-free flour with regular flour if you'd prefer, or you might like to try buckwheat instead, for a delicious nutty taste!

I find the texture to be really nice, and they do last a little bit longer in the cake tin because they're vegan. The brown sugar gives the white bean blondies a rich caramel flavor instead of chocolate, hence the name blondies!

Can I Freeze White Bean Blondies?

You can also freeze them. Let them cool, and cut into individual squares, wrap well in clingfilm and put them in the deep freeze! 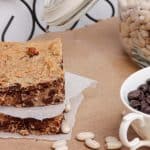