Traditional mayonnaise is made with egg yolks, vinegar, and olive oil. They are blended or whisked together at high speed until they start to amalgamate, thicken and produce a rich, unctuous sauce, or emulsion. Shop-bought mayo has preservatives in it to render the raw egg yolk harmless to people who may be vulnerable. I love to use it in my spicy taco slaw or on potato salad. Spread it on your favorite sandwich or add it to a salad dressing. I also love to dip papas arrugadas in it!

My recipe is nut-free and is not made with tofu or chick peas. I love telling people that I made my own vegan mayo, and when they try it, they cannot tell the difference between shop-bought!

A (very) Brief History of Mayonnaise

An emulsified sauce made from egg, vinegar, and oil was first mentioned in 1750, by a Valencian monk called Francesc Roger Gomila. However, he referred to it as Aioli, which is in fact, a very similar sauce. Aioli takes its name from its two constituent ingredients, oil and garlic (all e oli), and the recipe for Aioli has changed little since then.

But we're talking about Mayonnaise, not Aioli, and despite their very obvious similarities, the sauce that we now know as Mayonnaise was, according to the legend, discovered by the Duke of Richelieu during the French invasion of Menorca in 1756. He seized control of the Spanish Port, Mahon, and during this time discovered the delicacy that was Aioli. So enamored was he of this thick, creamy sauce, that on his return to Versailles, he insisted upon his court chefs replicating it, renaming it mahonnaise, after the Port he had claimed.

Since then, Mayonnaise has never dropped out of culinary fashion, instead of becoming more popular in the 20th and 21st Centuries, as iconic in many ways as Coca-Cola or the Hamburger.

So how do you make vegan mayo?

This is the best part of all. So, imagine a mayo that tastes just like shop-bought (only better!) and is vegan and cruelty-free, plus it takes less than a minute to make. It uses simple ingredients in your store cupboard.

I was googling how to make vegan mayo the other day because my boyfriend, who is egg intolerant, but on a keto diet, was dolloping Hellmann's Vegan Mayo on everything, and it seemed like it was quite an expensive habit. I found this recipe from the Loving It Vegan and made a few little tweaks (I removed the maple syrup element completely, and used half Canola (Rapeseed) Oil and half Olive Oil. The main ingredient that is completely non-negotiable is unsweetened soya milk.

Now, there is one piece of equipment you do need to make this mayo successfully, and that's a food processor or immersion blender with a blade. It works to emulsify all the ingredients in a way that a hand whisk can't.

The most important thing is that it has a blade or a blade attachment. I don't see why you couldn't use it in a smoothie maker too.

Once you have your ingredients in the jug, simply blend and you will have creamy, thick mayo in less than 60 seconds! And it tastes just like the real thing!

What Basic Ingredients are in Vegan Mayo?

In this vegan mayonnaise recipe, I used Dijon mustard (you could use dry mustard too) and lemon juice You could also add fresh herbs like dill or basil, chili sauce, or some vegan smoky seasoning to make a Baconaise-style flavor.

How Long Will My Vegan Mayo Last in the Fridge?

Because it is 100% fresh, it will only last 4 days or so in a mason jar. So, if you don't think you'll be using as much as this recipe makes, go ahead and halve this easy recipe,

Try my delicious vegan mayo with these vegan salad ideas 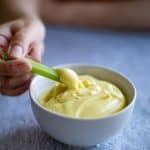