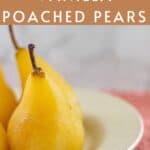 Vanilla poached pears recipe - a classic (some may say retro) dessert, that is so easy to make, delicious to eat and can be made in advance! The perfect dessert!

Whilst pears are typically in season in the Autumn, you can buy them all year round in the supermarket, so you can enjoy this sweet and simple dessert whenever you like!

Served with my homemade gluten-free granola and some natural yogurt, my vanilla poached pears recipe is a luscious breakfast treat too!

I am a pear convert. That funny grainy texture that they had, the tough skin and the fact that they were either hard or beyond the point of eating. I like fruit that is reliable, and pears are often not. Take the ones I used for this recipe. They were packaged as "Ready to Eat" but they were still too hard. However, when I poached them, they were ready within 10 minutes!

Despite pears being unpredictable, they have the most beautiful, fragrant flavour, and I think they could be considered the refined sibling of the apple. The older sister who has gone away to uni and always looks perfectly put together, alluring but somehow indefinable.

There are over 3000 varieties of pear, all waiting out there to probably disappoint me with how unripe/too ripe they, but I would love to try just a handful of them. Knowing how much region, rainfall, sunshine and a host of other factors affect the flavour of this beautiful fruit, they must all taste so subtly different.

The word pear comes from the Germanic word, pera, meaning fruit, which suggests that perhaps this was one of the first fruits discovered (although this could also be considered the quince). Evidence exists that the humble pear has been consumed by man since prehistoric times. It was introduced to Britain by the Romans and has become one of our most beloved fruits.

If you find that pears are unsatisfying to eat raw (reminder: I'm in the UK, fruits here can be hit or miss, to say the least), then try my simple poached pears method. When pears are slightly unripe, this method tenderises the pear and brings out the natural, slightly perfume-y taste.

Vanilla has a natural affinity with the scented pear, and my vanilla poaching syrup has enough flavour to enhance but not overwhelm. I love to see the pears dotted with the tiny black vanilla seeds.

To serve my vanilla scented poached pears. These are just perfect with the syrup thickened up and then poured over them and finished with a generous dollop of vegan whipped cream, but they are just as good served with yogurt for breakfast.

Simmer the pears in a saucepan with the sugar, water and vanilla pod until tender.

Remove the pears from the pan and reduce the syrup down until it is thick and sticky. Serve poured over the pears

My vanilla poached pears last for several days in the refrigerator, covered and kept in the syrup, which means it's perfect to cook them if you have a glut of pears.