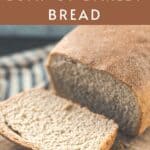 Barley Flour is quite an unusual ingredient these days, and you usually see it mixed in with proprietary bread mixes, but if you do happen to find some (I bought mine online), do try this delicious white loaf recipe, full of flavour and delicious texture.

Elizabeth David introduced me to this delicious recipe via her scholarly work on bread, English Bread and Yeast Cookery. I was prompted to order some barley flour online and give it a try, so great was her recommendation:

"Although, owing to its greyish crumb, barley bread may not look immediately appetising, those who acquire a taste for it are likely to become addicts. I am one."

And so too am I. I will always add barley flour to my simple loaves and even try it in a granary loaf mix now, such is the subtle yet complex flavour it adds to a plain white loaf.

The process of making the loaf is exactly the same as my simple white loaf with the exception that it uses a couple of tablespoons of vegan cream or yogurt (I used natural vegan yogurt, plain), this helps enrich the dough and give a finer crumb. It also has a deliciously crisp crust.

If you don't have barley flour, then I suggest you make my simple loaf instead or try experimenting using other types of flour. You can pick it up in selected stores or online from Waitrose or buy directly (in bulk) from Matthews Cotswold Flour or Shipton Mill. I bought a small bag from Amazon.

What is Barley Flour?

Barley flour is made from dried or "pearled" barley that has been milled very finely. Although nowadays barley is used for brewing beer, or as pearl barley, the flour has a unique, somewhat subtle nutty flavour. It contains less gluten than plain flour, so if you are trying to cut down on your gluten intake, it is worth swapping out some of your plain flour for barley flour in recipes (up to 50%, in fact).

Alone, barley flour won't give much rise, despite containing gluten like wheat flour, so it needs to be combined with a normal flour to make a decent loaf of bread. However, it is used in flatbreads and other quick breads that don't require much of a rise. It can also be used as a thickener in stew.

Barley flour also serves another purpose in breadmaking. Because it is lower in gluten, it will give you a lighter, tender crumb that 100% plain flour loaves can't always achieve at home. It is also lower in calories and slightly higher in fibre than plain flour.

Mix the activated yeast into the flours

Mix into a raggy dough

After a couple of hours, the dough should have doubled. Knock it back and knead for a couple more minutes more.

Once the dough has risen and started to fill out the loaf tin, bake in a preheated oven as per directions in the recipe card.

Hint: if you leave the dough for 10-15 minutes before the first knead, this gives the flour time to relax and will be easier to start kneading.

A 2lb loaf tin is the only specialist equipment you need.

This bread lasts quite a while in the bread bin or wrapped up in tinfoil, up to a week. If it seems a bit dry, it might be time to start toasting it!

Once the loaf has cooled completely, double wrap tightly in clingfilm and freeze for up to 3 months. To thaw, unwrap loaf and place in a low oven until completely thawed.

No, it isn't. Like wheat, they are both graining grasses that contain gluten.