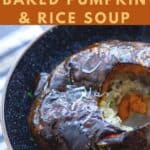 Easy vegan baked pumpkin soup is the perfect one pot dish with no waste and hardly any prep time at all - you bake the soup right in the pumpkin! Delicious, comforting and homely

If you have been to a restaurant and looked at the vegan options, you will be more than aware that the most common items are "such and such served with butternut squash" or "bean chilli" or maybe even just a salad or some sort. For years I was so over squash because it became absolutely ubiquitous with plant-based dining out.

However, I recently purchased a Natoora monthly veggie box, and was quite excited with the diverse range of fruit and veg. According to their website:

"It is through our relentless pursuit of flavour that we’ve come to source fresh produce for many of the best restaurants in London, Paris, New York City and Copenhagen. Now available for home delivery nationwide, get revolutionary flavour delivered straight to your door - only through the Natoora app. As well as bringing you phenomenal fresh produce, we take the same revolutionary approach to flavour to source sustainably-produced dairy & charcuterie and next-level store cupboard essentials."

The veggie box contains highly seasonal fruit and veg, so in April you can expect to get early asparagus, in July you might get Italian white peaches, and in December you might get a Delica pumpkin from Mantua, Italy.

I kind of sighed when I saw the pumpkin, like, what on earth am I going to do with this? But then I remembered that I had bookmarked a Jane Grigson recipe from her Vegetable Book, called East Craftsbury Pumpkin or Squash Soup.

I have been thinking about this recipe for a long time, knowing that, as with many of her recipes, the simplicity of ingredients will bely a deep and complex interplay between flavours. My version of Grigson's cabbage in the Troo style is perhaps my most popular dish, and I have cooked it more times than I care to think about.

East Craftsbury Pumpkin or Squash Soup (or as I have renamed it, easy vegan pumpkin or squash soup), is easier than you could possibly imagine. Simply carve out a lid from your pumpkin, scoop out the seeds, then fill the cavity with rice, stock, onion and seasonings. Bake until tender.

You can serve this delicious stuffed pumpkin recipe in a couple of different ways, depending on the size of the squash/pumpkin used:

Try my other Pumpkin Recipes

If you are using mini pumpkins, the process will be much the same, however you will need to divide the above ingredients between, say four, mini pumpkins. I suggest baking them for no longer than 30 minutes to start, and testing the rice. Then cook for 5 minute increments thereafter.
RECIPE BY Freya