Easy vegan white bean, potato and corn chowder, a comforting, creamy soup, perfect for any time of the year!

The calendar tells me that it’s Summer, but my goosebumps and two layers of clothes are telling me the opposite. This can only mean one thing: the unique British Summertime. The occasional sunny days, when all the barbeques are dragged out, dusted off and set alight, meat blackening on top of these pyres, are always generously seasoned with showers, wind, overcast-ness and even hail. And, when the sun does shine, it reaches almost Dante-esque temperatures that are almost unendurable.

Try as I might to endure the constant flip-flopping of the weather, I have simply written summer off as a bad job and am looking forward to Autumn instead, when we at least stand some chance of warm weather.

This has reflected itself vividly in my cooking too. Cozy soups and comforting puds have been on the menu in the Erickson household these past few weeks.

I don’t want to completely give into eating steamed puddings just yet though, or cooking full roast dinners so I am trying to find a decent balance. Chowder seems to fulfil that need for something to give me a warm, culinary hug without shouting "Winter!" too loudly at me.

Despite its relatively local etymology (Chowder is a derivation of the French word Chaudiere, which roughly means a “hot pot”, although it could also refer to the word “jowter”, old English for Fishermonger), us closeted Brits don’t really cook Chowder, preferring vegetable, tomato or the Little Black Dress of the soup world, Chicken. However, I have recently discovered the joy of Chowder, just as the New Englanders did, so many years ago, when Breton fishermen would serve up huge, bubbling cauldrons of fish soup, freshly made with the catch of the day. To this day, Chowder is always affiliated with New England despite there being many deviations from the original French recipes, which would have originally resembled a Bouillabaise.

Indeed, such is the widespread popularity of the Chowder that it is noted in Moby Dick and makes an appearance in an episode of the Simpsons. Expensive but inferior tinned versions are available on every supermarket shelf, although I often find these need loads of white pepper to give them a bit of flavour. That said, I just love the taste of pepper!

The most famous of all Chowders though, is the Clam Chowder, a typical New England version, using their local shellfish catches and almost impossible to replicate if you live in the UK, far away from where Clams tend to inhabit. Fortunately, tinned Clams offer an ethereal taste of the Northeast and can be quite a convincing substitute.

But, for those of us who don’t eat meat or fish, or the unfortunate few who don’t tolerate shellfish, you can forget the fish altogether and make this vegan version using potato and corn. The familiar creamy chowder texture is still vivid and the corn adds a wonderful sweetness to the soup that is offset by green peppers and onions. Some versions even add tomatoes, which are more redolent of the original fish stew served up by those French fishermen all those years ago. My easy vegan corn chowder is the perfect hearty soup for that time of year when it starts to get a little cooler in the evenings, and you dole out cups of the soup with big hunks of bread, to warm up, its savory flavor a bolster against the chill of the cooler months.

It is so easy to make my simple vegan clam chowder, using simple ingredients. You can use fresh sweet corn or canned, depending on the time of year. During the warmer months and corn season, fresh corn is so easy to find, yet I find that this thicker soup is perfect all year round.

How Do I Make Vegan Chowder?

If you love this soup, try my other delicious vegan soups 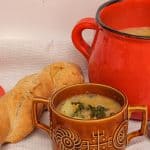