How to make vegan Parsnip soup - creamy, spicy and so comforting, a real classic, and so easy to make!

Today's soup was a complete transgression from the soothing broths that we love. Today's soup was big, bold and punchy, a real Wintery soup (although it was actually quite mild).

It was also fun to make and was in the bowls and our mouths with pleasing rapidity and I was using up some rubbery parsnips that were lurking in the fridge.

Ahh, the parsnip! (Or Pastinaca Sativa if you will), It looks sort of like an anemic carrot but tastes quite, quite different. Earthier, sweeter and more herbaceous. You may have had them roasted for Sunday lunch, maybe with charred spindly bits. But it's also great in a soup, and even better as a vegetable chip.

And then...then there's the health benefits! Did you know that it is high in potassium and antioxidants? Or that in the Middle Ages people made sweet pies from them, using it as a sweetener. And did you know that Parsnips have a higher glycemic index than chocolate which makes them the perfect slow burning energy food. And they have no calories either, virtually. Of course, you might not always want to choose parsnip over chocolate (and who would?), but it's certainly an option in these diet-obsessed times we live in.

How to Make Parsnip Soup

This soup is Curried Parsnip with Parsnip Crisps. It is cooked in much the same way as Potato Soup, which is to say that the vegetable in question is sweated down with some onion, stock and then pureed in the blender. The main difference between Potato Soup and this soup is the intense flavour of curry and lemon juice that punctuates the sweet Parsnip. It is completely delicious, very warming (the heat that penetrates through the soup is startling) and great with the Parsnip Chips – another victory against my deep fat frying fear. These crisp beauties are a revelation.

Try my other hearty vegan soups 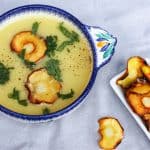 For the Parsnip Crisps

To make the Soup

To Make The Parsnip Chips: