Home » Recipes » All the Vegan Lunch and Supper Recipes

Vegan Baked Potato Soup, a huge hug in a bowl, full of comforting flavors and a creamy texture, perfect for cold nights

There is NO food that is more comforting than a piping hot baked potato, dripping with vegan butter, melty vegan cheddar cheese and baked beans. Or perhaps you prefer a fully loaded baked potato soup with all your favorite toppings: green onions, vegan sour cream, tempeh bacon bits. The works. A warm bowl of soup is like a hug in a soup form.

A baked potato ALWAYS satisfies a craving for something that tastes like home. It is the plainest, simplest dish yet always tastes so good.

Until I visited America, I had no idea that some evil genius had turned my favourite sort-of convenience (if an hour in the oven is convenient) into a soup. The first time I tried it? That soup the best thing I have EVER tasted. It was creamy, comforting and had all the flavour of a baked potato, but in a soup? What an amazing idea! I loved Panera Bread, and all the delicious soups and breads, but sadly, they were not vegan.

I have slowly realised that my old favourites (you know, the ones loaded with non-animal friendly products like butter, cheese, bacon) aren't to be relegated to the back of my memory, like an old-fashioned sweater or embarrassing family member. They CAN be recreated and, because of the plant-based ingredients, they are no longer stodgy and give you stomach ache, high cholesterol and/or weight gain: they taste lighter, more modern. More delicious. Here then is my easy and best vegan baked potato soup recipe, perfect for cold rainy days.

This delicious soup tastes great the next day too, just make sure to cool completely before refrigerating. 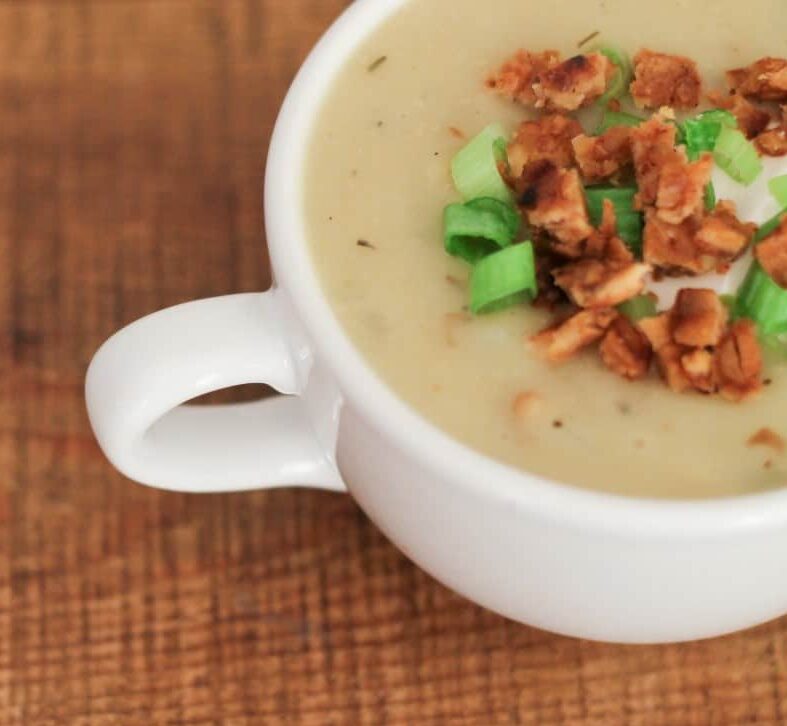