De gazpacho no hay empacho!
– There is never too much Gazpacho!

How to make easy delicious Gazpacho Soup. Is there a dish recreates summer more eloquently than Gazpacho? Probably not, for this ancient Andalusian soup is made with only the freshest, warm weather ingredients and then served cold, preferably over ice, for a truly refreshing and satisfying summer meal.

Gazpacho is the only cold soup that I have made. There is something about its bold flavours that brings to mind Bloody Mary cocktails, yet, despite being alcohol free, it is far more complex than that. It is simple and quick to prepare but the chilling is essential, the flavours need time to mingle and, like a Moussaka is best at room temperature, so the Gazpacho is best served cold, cold, cold.

The dish, although thought of as being Spanish, originates from the Roman days, many hundreds of years ago, a peasant dish made from just olive oil and stale bread. The word Gazpacho is a derivative of the Latin word caspa, meaning crumbs or fragments and indeed a true Gazpacho is still blended with stale bread which gives a distinctive thick texture.

Much later on in the 15th Century, after the New World crops were introduced from the Americas to Europe, peppers and tomatoes were introduced to the dish and it has changed little since then.
The odd additions of herbs, perhaps Basil or Parsley, a dash of Tabasco here, some Cayenne Pepper there, or perhaps the soup being strained to produce a fine broth are the most common modifications to the soup.

There is also a white Gazpacho, Ajo Blanco, which is made with blended almonds, garlic and the ever-traditional bread and olive oil, not to mention restaurants turning the dish into something altogether more expensive and glamorous. I don’t use garlic in my version although some do, I find the flavour too distracting from the cleanness of the other ingredients.

I do add some chilli for a little heat, celery because I love the herbal quality it gives to the dish and sometimes a can of tomatoes if the fresh ones are a little peaky or bland (which they often are over here) and it makes the soup go further. I don’t sieve my soup because I find it more substantial served chunky but feel free to strain if you wish.

But, remembering that this is a traditional peasant dish (which far from being a derogatory term, reflects the inventiveness that comes with frugality), it is a wonderful way to use up tomatoes that are a bit past their use-by date, peppers that are looking shriveled and bread that not even the dog will touch. The one proviso is that you use the best quality extra virgin olive oil that you have in the kitchen – bad olive oil will flavour the soup in a most unfavourable manner.

So, bearing in mind that old Spanish saying, “There is never too much Gazpacho”, here is the recipe for easy delicious Gazpacho.

Oh, and don’t worry that your Gazpacho isn’t as vibrant coloured as you might think. The olive oil and bread turn the soup a beautiful peachy colour instead.

How Do You Peel Tomatoes?

How to Make Vegan Rock Cakes

How To Make An Easy Vegan Quiche 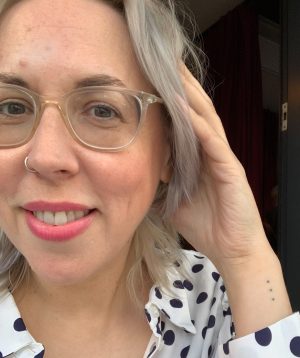