Vegan refried beans recipe. When I first read about refried beans, I think in a book by Jan Kerouac where they were referred to by their proper name, Frijoles Refritos, I thought that they sounded deeply romantic and exotic. I pictured myself walking past brightly coloured adobe houses, my long skirts brushing against the dusty red roads, then stopping at a roadside vendor and buying a Tamale. I imagined that I could smell the hot cornmeal as I unpeeled the husk, my olfactory senses tempted by the smells of roasted chilies, my other senses enlivened by Mescal.

I have not yet made it to Mexico, unless Albuquerque, New Mexico counts, when I once spent twenty four discombobulating hours avoiding long haired panhandlers, jumping at the sounds of gunshots at midnight and wondering why a struggling 10 year old child would be carrying a large box of drugs into an elevator. The only culinary recollection I have from those twenty four hours was the late-night Daiquiri Ice from Baskin-Robbins. I also remember leaving the flaming crimson sunsets over the mesas as we drove at breakneck speed towards Texas, the next stop of our journey.

Alongside my Frida Kahlo-esque dreams of Mexico, the only other way we can replicate the blazing hot sun and glazed bean pots is in our kitchen. Along with our sense of smell, the taste of something evocative can send us hurtling to those imaginary places we have always wanted to visit, or to remind us of those idyllic childhood foods that always tasted so much better back then.

I have more cookbooks on the food of Mexico than anything else and I never tire of the cuisine, its seeming simplicity and reliance on slow cooking to extract every molecule of flavour, the use of so many types of chillies, all of which play a different role. When I smell fragrant Cumin or Cinnamon or my nose starts to tickle from a generic hot capsicum (because that’s all my local supermarket stocks), I feel as though I am there, reliving imaginary adventures.

I have a book on Mexican cuisine called Mexico – The Beautiful Cookbook. It is a huge outsize book and you may remember the series from your local Barnes and Noble. I often flip through this book whilst lying in bed but I only cooked from it for the first time yesterday. The authors, Suzanna Palazuelos and Marilyn Tausend, have grouped the book loosely into regions, and there is a useful guide to some of the more unusual ingredients, such as Huitlacoche – the Mexican Corn Truffle (and if anyone knows where I can locate a tin in the UK or would be kind enough to send me some, I would be their eternal friend).

With this being one of the most concise books on the Mexican kitchen, it was extremely hard for us to choose one recipe in particular to cook. However, I chose one of my favourites, Refried Beans. My original daydreams about Refried Beans were shattered when I first tasted some from a tin. Dry, claggy and distinctly lacking in flavour, these were surely not what I had been yearning for all these years? I must have been missing something because an American friend chowed down on Bean Burritos with all the fervour of a Jack Russell around a rats neck. He saw it like this: poor Mexican food is still better than no Mexican food. Point taken and duly noted. I still avoided Refried Beans though unless they were smothered in salsa, guacamole and the all important sour cream.

I thought I would treat my friend to his favourite dish and bought some mottled pink Pinto Beans. Suffice to say, they languished in the corner cupboard, the one with the ineffective revolving door that bows in the middle but is OK for holding all my other dried pulses, for quite a while until I started flicking through Mexico – The Beautiful Cookbook and stopped at Frijoles Refritos. “It’s funny how Summertime always makes you crave Mexican food” I thought. It seems to have a natural affinity with the outdoors.

Like making your own bread or marshmallows, making homemade refried beans seems like it’s best left for the professionals. However, once you scrape beneath the recipe and get your hands dirty, it’s much easier than you think. Using a few simple ingredients, a good vegan refried bean recipe and a little relaxing cooking time, you will have turned dry pinto beans into a delicious side dish!

What are Refried Beans?

For one, the refried element of the dish is a misnomer. The beans are first simmered in water and lard, spiced up with some chillis (dried, chipotle for example) or fresh (jalapeño pepper), then mashed (with a potato masher) into some onion-fragrant lard (yes, more lard) until a paste the colour and texture of pink adobe is achieved. There is no second frying and it is merely a misinterpretation of the Spanish language that has led to this common misconception. Refrito (as in Frijoles Refritos) literally means "well-fried" ("re" being used to exaggerate the importance of a word and "frito" meaning, of course, "to fry") and because the beans are "overcooked" in the lard to achieve a dry texture this name has been passed on for generations. It is easy to see how the confusion occured - re-fried / re-frito. Of course, lard is not vegan, so I simply used Crisco or Trex. They are vegan shortening and work perfectly.

Dried Beans, notably the Pinto, have been part of the Mexican diet for hundreds of years and they are justly proud of this culinary heritage, the Frijoles and its accompanying dishes have sustained them culturally for years. A more thorough and excellently written history than I can provide can be found here.

Apart from being the Barbie Doll of the Legume world, this speckled pink, curvaceous bean has an incredible flavour and texture. Unlike other beans that I have used, the Pinto Bean even emits a deeply savoury smell when soaking in water. And when cooked, they contort out of their designer skin to reveal their naked, ever so slightly mealy but mostly creamy body that was just made for re-frying.

Everyone who is an aficionado of refried beans will have their own way of serving them: mounding them up on a plate and sprinkled with some vegan cheese, cosily smothered in a corn tortilla or given the cheese treatment in a Quesadilla. Once you have made your own easy vegan refried beans, you will never go back.

I love them served with Mexican rice and just a squeeze of lime juice to make everything sing. It's the perfect meal. And whilst a can of refried beans (yes, old el paso) is sometimes a good alternative, it isn't the same. This easy recipe takes very little of your time.

Enjoy this vegan refried beans as part of your next taco night, in a tortilla or just warm with some nacho chips.

But, whatever you do with your frijoles refrito, you must, of course, start with your humble Pinto Bean. Here's how to make vegan refried beans.

Try them with my delicious vegan Tacos 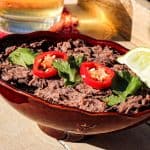