What can I cook with Salsa Truffina? Salsa Truffina is a heady sauce from Italy made from local mushrooms, truffles and olive oil. Texture wise, it resembles a bronze coloured pesto and has an earthy, sensual fragrance that is delicately translated when added to pasta or combined with, for example, spinach (as the recipe prepared by myself, below).

For those who have had the opportunity to smell fresh Truffle, it is an unforgettable scent that is primitively evocative. Indeed, it was a brave man who tried many things for the first time, not least of all, the grubby, nubbly truffle, which is nothing to look at, and in truth, probably smells quite repulsive to some people. However, he (or she) was rewarded with a gift from nature that is worth perhaps more than an emerald or ruby, assuming, of course, that he (or she) had impeccable culinary tastes. Dogs love to sniff out truffles, and once my greyhound, after several days of insane snortling at a particular tree stump, unearthed one. Yes, you can find truffles in England!

It is almost impossible to fully describe the taste of a truffle, but it lends an indelibly savoury, muskiness to any dish that it is added to, whether as a grated flourish on top of risotto or, for the poorer man, some Salsa Truffina stirred into pasta. I recently purchased a small glass jar of Salsa Truffina (literally, Truffle Sauce) from the exotic section of delicacies in Sainsbury’s but it is also available to buy online or from your local specialist food shop.

I had wanted to try a recipe that I read about in Tessa Kiro’s Falling Cloudberries (which is a wonderful collection of recipes gathered from Sweden, Italy, Greece and South Africa. It is far more coherent and eclectic than her latest book, Apples for Jam, which looks lovely but is perhaps a bit too twee and simplified for some tastes), Spinach and Truffle Triangles, hence the purchase and before trying the sauce I did wonder if perhaps I had purchased an ingredient that was a touch too recherché to be ever used again. Not to mention it was over £9.00, which is quite expensive, even if it is a truffle-based product in a perfectly darling little glass jar with lots of gold on it.

However, after devoting some time lovingly making the rough puff pastry (although, in fact, I actually knocked it up in my lunch-hour after walking my dogs and having lunch itself, and it still turned out delicious despite being rushed), which is really the only complicated part of the whole procedure I thought to myself: there’s no turning back now.

After work, I started to prep dinner, which was a veganised mushroom risotto (from Delia’s Winter Collection), so whilst the onions and mushrooms were sweating down, I started to roll out the pastry for the Truffle Pasties.

How do you Make Vegan Rough Puff Pastry?

I have detailed the full procedure here, but if I can make rough puff pastry in 10 minutes flat, then so can anyone. I must confess that as I started the recipe, I thought the pastry was going to be a bog-standard shortcrust but as I went on, the folding and turning of the butter into the flour made me realise that I was already part way through making something a bit different that I had never made before and that yes, I had made the rash decision to prepare in my lunch-hour.

Anyway, the filling of these delectable morsels comprised of finely chopped spinach mixed with a tablespoon of the truffle sauce, some truffle oil and some diced Mozzarella. The pastry is cut into squares, filled with the mixture, folded into a triangle, brushed with egg and baked for about 10 minutes. It is incredibly hard to resist biting into one once removed from the oven but if you wait, the flavours develop and then pop! in your mouth. Furthermore, if you are worried about using up the rest of your Salsa Truffina, may I suggest stirring it through pasta or in the filling of my vegan quiche for a mindblowing yet simple supper. 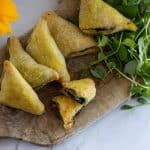 Note: the nutritional numbers are incorrect for this as they are calculated automatically. The app has not identified salsa truffina.
RECIPE BY Freya