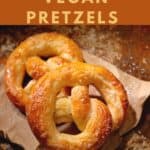 A simple and easy recipe for pretzels, dipped not boiled and naturally vegan!

Try my other simple vegan bakes, no knead muffin bread and my so-quick-it's-ridiculous beer bread.

Much like bagels, pretzels are still somewhat of a novelty in the smaller, more 'sheltered' villages of little Britain. It takes a long while for us to accept culinary change, particularly if they are in anyway associated to a culture we may not understand and what is considered part of the fabric of US cuisine (so much so, that - according to dubious fact machine, Wikipedia - 2 Lbs of pretzels are consumed every year - by every American), it could be another 3 decades before it is fully integrated over here.

Until today, I had locked away that uniquely salty soft bread treat in the taste-bud part of my brain or console myself with airplane pretzels (and if you have been lucky enough to be on a post-peanut flight, you will probably have been given Snyders of Hanover pretzels, those little golden packets somehow holding all the promise of your holiday right there on the tray in front of you).

After baking pretzels, I wondered why I had waited so long, and it wasn't just my lack of artistic ability or not being able to curl them into their familiar shape. Pretzels are perhaps one of the easiest yeast-based breads to make and certainly tastier than any long-rising loaf.

However, like any bread that has many years (nay, centuries) of history preceding it, the pretzel is not without controversy. Only yesterday did we encounter this. On investigation of various recipes, my friend insisted the pretzels MUST BE BOILED BEFORE BAKING. I, on the other hand, pointed out this recipe, that merely dips the raw, formed pretzels in hot sugary water, then leave to prove for half an hour before baking. Much easier than boiling.

For those of you who have never tasted a hot soft pretzel, it has an almost indefinable savouriness, much like cabbage or oysters, a saltiness that is pleasurable without being wincing (although, unlike cabbage and oysters, I love pretzels dipped in chocolate). There is also a second layer of flavour that comes from the bagels being brushed with melted butter, the slight separation of the butter giving a rich shine to the thick, golden twists.

This ancient treat has roots in Germany, Italy and even France, documented as early as the 7th Century. A rather charming story tells how an Italian Monk folded little pieces of dough into an intricate twist referred to as 'Pretiola', meaning 'little reward' which was given to diligent children who learnt their prayers. There are also other stories: a German baker desperate to save his life if only he can produce a bread for the Duke of Wurttemberg through which the sun can be seen twice. In another religious twist (pardon the pun), legend also suggests that the pretzel could have garnered its unique appearance through its yeasty depiction of the Holy Trinity or perhaps the position that monks adopt when in prayer.

Whilst the true history of the Pretzel remains shrouded in mystery, this curly treat remains firmly in favour.

We love to serve them with my creamy vegan baked potato soup.

Yeast. Make sure your yeast is fresh, even the kind that comes in foil sachets. Nothing is worse than wasting bad yeast on a batch of ingredients.

Sugar. This helps activate and feed the yeast. Later on in the recipe, it also forms part of the dip.

Butter. Vegan of course. This helps ensure that you have glossy pretzels, when brushed with melted butter at the end of baking. Also helps any toppings stick.

Adding the yeast to the flour and sugar

Mix until you have a shaggy dough

After kneading, leave the dough in a bowl for at least an hour or overnight to rise

Knock the dough back, then form into a rough cylinder, then divide into 8

Roll the dough into balls, ready to form into pretzel shapes

Once formed into the classic pretzel shape, carefully dip into the sugar water mix

If you find the process of making the pretzel shape tricky, try making pretzel breadsticks instead, cutting each tube shape into 3 or 4 equal lengths, then following the dipping process but without the folding.

To store your homemade vegan pretzels, keep in an airtight container, once cool, and then warm up again in the oven. They are best served fresh, but are OK the next day heated up. After that, they go pretty dry.

Can you freeze pretzels?

You can once cold, but make sure to reheat them in a hot oven to crisp them up. They won't be as good as fresh.