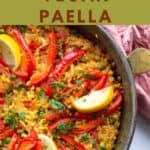 The traditional Spanish rice dish...but vegan! Adding more peppers and peas and tomatoes to make this a filling, one pan meal for the whole family, ready in less than 45 minutes!

Does the word Paella remind you of a hot holiday by the beach, somewhere Mediterranean, or perhaps a food fair, huge paella dishes, 5" wide, filled with bubbling saffron rice and peppers and emerald green peas. More often than not, it will also be topped with seafood or chicken or rabbit. My version of delicious paella is full of fresh veg and lacks none of the flavour of the original!

This was inspired by my Italian vegan risotto, my quirky roasted beetroot risotto and my plant-based soutsoukakia, all of which are comforting, homely and delicious recipes from the Mediterranean.

Paella is considered the dish of Valencia, although most people outside of Spain think of it as a Spanish dish, and I think it is probably cooked for tourists, as there is a certain expectation to try paella when you visit Spain.

Paella is the Valencian word for frying pan, and as you will probably be aware, traditional paella is cooked in a wide, shallow frying pan (although one with handles on both sides).

Paella rice is used in this dish, to ensure the correct texture. Whilst Paella is creamy, it is not like risotto, nor is it dry. It is usually made using a short-grain rice called Bomba, although the rice I bought in Tesco was simply called Paella rice! You must use a short-grain rice though, and if you can't find paella or bomba, use arborio or even sushi rice.

The flavour of Paella comes from very simple ingredients: paprika, peas, stock, onion, peppers, saffron and olive oil. It has a rich, savory flavor, redolent of peppers, smoky from paprika and sweet from the onions and tomatoes. This dish is traditionally cooked outside, over an open flame which gives Paella a distinctive smoky taste; paprika works particularly well to replicate that flavor for the indoor cook.

The dish is very easy and quick to prepare and cook, and is a perfect supper dish, or lunch meal for several, as it doubles up very easily.

After frying the peppers in olive oil, sauté the onions, garlic, tomato and peas until soft

Then add the stock, paprika and saffron

Hint: if the rice looks like it is cooking a little dry but it still quite al dente, add another half cup of stock.

I recommend using a paella pan to cook your risotto in, however, I use a flat bottomed tarte tatin tin as I don't have a paella pan! The key is that the heat is distributed evenly on the bottom of the pan, so any heavy bottomed pan will work.

Store the cooled paella, covered in the fridge, and reheat thoroughly in a saucepan until piping hot. I actually prefer to eat my paella cold.

Paella is delicious served lukewarm, and is a perfect lunchbox treat! This recipe makes enough for 4 lunches!