What is Monk's Beard?

What is Monk's Beard? If you are familiar with this website, you will know that I love using unusual ingredients, and trying to demystify what they are, what they taste like and if they're really worth buying. From the point of view of a person who cooks a lot, no ingredient is without value, however, some ingredients are too costly to justify buying, especially if there is something comparable.

That said, I love a seasonal veggie box, and no one does better veggie boxes than Natoora (just quickly like to add here that this post is not sponsored by Natoora. Sadly, despite my tagging them in all my delicious dishes, they pretty much don't know I exist 🤣). They are passionate about seasonal produce and use equally passionate micro-producers to supply unusual or rare types of fruit and veg that we just wouldn't see elsewhere.

Monks Beard is one of those veg. A seasonal vegetable, at it's most tender between December-February, Monks Beard (also known as Agretti or Barba di Frate, Beard of the Friar) is a succulent from the genus Salsola. A coastal plant, it grows wild (and is considered invasive, in some areas) in Italy, Portugal, Spain and more recently the Pacific Coast of North America.

Flavourwise and texture-wise, I would compare it to Samphire, and indeed, if you are unable to find Monks Beard for this recipe, just go ahead and use that instead.

It comes in large shaggy bunches, like huge green shaving brushes, and you can see why it is called Monk's Beard. You can see from my photo that it is quite a coarse looking stem, but actually wilts and softens very quickly when sautéing.

It has a delicious texture, not stringy at all as you might imagine (although I would think it is, the older it gets), and the flavour can only be described as a coastal saltiness, minerally, much fresher than say seaweed, and very similar to Samphire (although less salty).

How do you prepare Monk's Beard?

I kept mine in a glass of water, almost like a bunch of flowers, for a couple of days before I decided what to do with it. Deciding on a traditional Italian-style pasta dish, I cooked up a little angel hair pasta (Vermicelli), the texture of which is so similar to the Monk's Beard.

I then sautéed some garlic, black olives (the brininess of which is a perfect match for the Monk's Beard) and cherry tomatoes. Using scissors, I cut off a clump off the Monk's Beard (above where it starts to turn purple and more fibrous), quickly rinse it under the tap, then scatter it on top of my sauce.

Adding some lemon juice, zest and a little of the pasta water, I gently mix in the cooked pasta. Scatter with a little chopped parsley and that's it! A super simple dish that is so complex in flavour.

You can also simmer trimmed Monk's Beard in a little water, just blanching it really, to serve as a side vegetable.

If you want to try something different, I highly recommend seeking out some Monk's Beard. If it's the wrong time of the year, then please try this dish with samphire instead, as that is just as delicious! 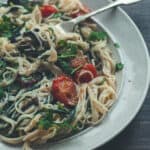