Vegan Cauliflower and Potato Curry recipe. For those of you who love Sag Aloo (Bombay Potatoes), I thought I'd share this delicious Indian potato dish with you. This recipe utilises considerably more spices than the Sag Aloo, but most of them you will already have in your store cupboard.

I adapted this Cauliflower and Potato dish from a recipe by Atul Kochhar, one of Britain's most innovative Indian chefs and it takes absolutely no time at all to make, literally the time it takes to find the spices out of the cupboard (in my case, this can sometimes be several hours), and chop the cauliflower and potatoes, plus a couple of tomatoes.

Unlike some curries, there is no need to sauté onions beforehand to add that extra element of flavour but the addition of Nigella (Onion) seeds and layering of spices gives the distinctive "Indian Restaurant" flavour that is so hard to replicate at home. Despite this, the cauliflower is never overpowered and I liken this dish to a spicy cauliflower cheese (although it has no cheese in it).

How do I Serve Potato and Cauliflower Curry?

I served the curry with some plain boiled basmati rice, but it would be great served alongside a meat-based curry if you were preparing an Indian banquet for a mixture of guests. I think it would also be just as good served alone, with just some Naan Bread to mop up the deliciously fragrant sauce.

Tips and Hints for this Vegan Cauliflower and Potato Curry Recipe

For more delicious and quick vegan lunch and supper recipes 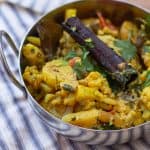