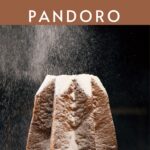 Vegan Pandoro recipe - Pandoro is a classic Italian yeast and egg/butter enriched bread - sounds difficult to make plant-based? Not as hard as you might think! This sweet bread with its sugary coating is a fun and simple bake. As with most baking, you just need time and patience.

You will start to see Pandoro in the stores in November, just in time for Christmas. It will come in beautifully colourful boxes but will not generally be suitable for people with food intolerances. My version is eggless and dairy-free, but tastes just as fabulous as shop-bought!

This vegan pandoro recipe was inspired by my other interesting breads that you might like to try, my Chelsea Buns, for example or my simple granary loaf?

Pandoro (also called Pandoro di Verona, the golden bread of Verona) is a classic Italian, enriched sweet, yeasted bread. It is similar in shape to Panettone, in that it is quite a high, cylindrical shape (and it should be sliced in circles, not in cake slices). However, a Pandoro is baked in this beautiful star shaped mould. Panettone is filled with dried fruits and is a spicier bread, but a similar dough recipe.

Classically, any "enriched" bread gets that rich, buttery flavour and flaky or light texture from lots of eggs and butter. We all know how delicious cakes are, and it comes down to both the flavour and the texture they get from eggs and butter, and a sweetened bread is the same principal.

It means that, for people like Tim, who has a rather unpleasant egg intolerance, or my work colleague Imy, who has a dairy allergy, these foods are out of the question. However, there are ways around this! Replacing butter is generally pretty easy, although I find that some vegan butters have a high-water content, and this tends to make makes "spread out" more than I would like. So, I tend to use a baking block instead.

A baking block is usually a supermarket's own brand of Stork which, yes, is margarine. And I know, this doesn't give the same, rich flavour as butter but sometimes we have to make sacrifices. However, if you have a vegan butter that you love and that works well for you, please go ahead and use it. I am still having a love/hate relationship with Flora plant-based, and we're currently on a break.

To replace the eggs in this vegan Pandoro recipe, I have used yogurt. The original recipe (from Visions of Sugarplums, by Mimi Sheraton) uses several 2 whole eggs and 3 yolks, so I played around with the measurements, and this seems to work.

So, this is not a difficult process by any means, but it does require a little bit of baker's knowledge and experience.

The dough requires very little kneading, just a couple of minutes at the beginning to bring it all together and get that gluten going.

The second part of the pandoro will be familiar to you if you've made puff pastry. It's the same principal of adding butter to the dough, folding it in thirds, then rolling it out, and repeating this process (see below).

Finally, the dough is curled into a swiss roll and placed inside the mould, left to rise, and then baked.

So, it's three fairly straightforward steps, and can be done over two days. I like to make the dough and leave it in the fridge overnight. I take it out of the fridge the next day, bring it up to room temperature, and then start the rolling process.

Notes: The first time I made pandoro, the dough was full of holes, and whilst it tasted delicious, it did not look light and fluffy. Originally, I had dotted vegan butter over the rolled-out dough, and as this had melted, it had left large, unsightly pockets in the dough. And we don't want this to look like a sourdough! I tried again by spreading the softened butter over the dough instead, and this worked much better.

Lightly butter the inside of the Pandoro tin and sprinkle with granulated sugar. This gives the Pandoro a delicious crisp crust.

Whilst your yeast is activating, beat together the yogurt, salt sugar, lemon zest, vanilla and melted (cooled) butter until you have a smooth mixture.

Add the activated yeast to this mixture, then beat in the flour until you have a dough that is soft, but not sticky, and that you can form into a ball. Knead for a couple of minutes. Leave to rise for a couple of hours or overnight in the fridge.

Roll the dough into a rectangle and spread half the butter down the middle (second third) of the rectangle. Fold over the left-side to the centre and now spread the rest of the butter on top of this third. Then bring the other third over the top (the right side), to form a "book" shape.

Roll this "book" flat, wrap in clingfilm and chill for half an hour. Repeat this process three more times.

On the third roll, once you have rolled the dough flat, now roll it into a swiss roll shape.

Curl the roll into the prepared Pandoro tin and leave to rise for another hour and a half.

Bake for 40-50 minutes until a skewer comes out clean and it sounds hollow on the bottom. Dust with icing sugar.

Hint: make sure the butter is at room temperature before you spread it, otherwise you might end up tearing the dough trying to spread it!

I purchased a pandoro pan on Amazon for quite a reasonable price but you could use a kugelhopf pan if you have one.

Will keep at room temperature, if wrapped up well, for up to 7 days.

You can freeze this pandoro. Wrap it up tightly in clingfilm and freeze once completely cool. To defrost, unwrap and place in an oven on the lowest heat.

Use any leftovers of your pandoro to make sweet breadcrumbs or cut into chunks to make a bread pudding!

To activate the yeast

for rolling the Pandoro