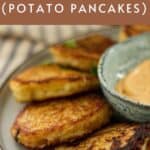 If you've ever had potato pancakes in a restaurant, they might have been called rosti or latkes or even hash browns. Boxty are none of those things. Read on to find out!

Boxty is a traditional Irish potato pancake, served on St Brigid's Day, with Ireland, and probably all year round elsewhere (and in Ireland too!). Ironically, St Brigid is the patron saint of dairy farmers, so hopefully she approves of my fully vegan boxty.

I love to serve boxty alongside some vegan mayo or my perfect pizza sauce, or, if you fancy a replacement for the great British banger, you could try my vegan Glamorgan sausages. And if you fancy another budget supper, you cannot go wrong with vegan bubble and squeak!

So boxty are made in a very similar tradition to other potato pancakes: grated potato which you then take ages wringing out to get nice and dry, and then this is dropped in a very simple flour and milk batter. They are then fried. Traditionally there would also be an egg mixed into the batter, and the boxty would be fried in bacon fat. None of that here, although I do recommend you add a little vegan butter to the frying pan.

Aside from the grating of potato, which we all know is a complete pain, these are possibly the easiest and most trouble-free pancake to make ever. And even better, they taste great the next day too!

Boxty are savoury pancakes, and great served with ketchup or baked beans!

I found that when reheated the following day, they took on the taste of something I loved as a kid, eggy bread, the savoury version of French toast. It's strange how the brain (or tastebuds) plays tricks on you. Boxty has no egg or bread in it, yet was deeply reminiscent of my childhood favourite snack.

You could serve as an accompaniment to a meal with some veg, but I think they make a great brunch dish on their own.

Mix the wet ingredients into the flour

Hint: I use a biscuit cutter to get a round, uniform shape for all my boxty, but you can just drop in spoonfuls of mixture.