Easy vegan rhubarb cake. Rhubarb always reminds me of my grandad. He would tell me, as he tucked into a bowl of stewed rhubarb and custard, that his favourite way to eat fresh rhubarb was raw. During rhubarb season, freshly picked and dipped into a bowl of sugar. He would sit on this front door step as a boy, the warm summer sun on his face, rhubarb snapped from it's mass of bushy leaves. His sisters fussing around him, as he was the baby of the family. He passed away four years ago, and I hope that he felt that warmth on his face, and feeling of love as he slipped away. I miss him everyday. He was such a positive, grounding influence on our family, gentle and kind, always supportive and always proud.

I still have to try raw rhubarb that way, but I know he also would have loved this vegan Rhubarb Cake. There is a deeply evocative, old-fashioned mood to fruits like rhubarb and gooseberries. It's a little bit Enid Blyton, washing down cucumber sandwiches with lashes of ginger ale.

Fact: Did you know that rhubarb can be grown above ground or in dark tunnels (forced rhubarb)? The forced gives you the beautiful jewel coloured pink rhubarb.

Last week I bought some rhubarb from my local farm shop, and was idly scrolling through google, looking for rhubarb recipes, when this beautiful, chevron-designed rhubarb cake from KateBird Bakes leapt off the screen at me.

Her rhubarb cake is not vegan, so I made my own adjustments to make it so, but what her cake is, is a labour of love. She details how she worked and reworked her recipe, to produce the most perfect, delicately scented almond rhubarb cake. I have been able to streamline some of the steps in the original recipe (and I apologise to Kate if this to the detriment of her recipe), which makes this quite a quick cake to put together.

What Can I use Instead of Rhubarb?

If you don't like rhubarb, you can use the following fruits, all of which will be just as delicious:

Make sure to peel, core or stone any of the fruits as necessary. You could even use tinned fruit, thoroughly drained, in a pinch.

What Makes This Cake Vegan?

I also used soft brown sugar in the recipe instead of white sugar. I know that, healthwise, there is not a huge amount of difference, but I prefer the flavour and colour that brown sugar gives to cakes. An almost imperceptible caramel hint. The choice here, is of course yours. Don't let lack of brown sugar stop you making it. Just go ahead and use white!

How Do I Make A Vegan Rhubarb Cake?

It's pretty simple. Cream your butter and sugar together until it's pale and fluffy. Beat in your prepared egg replacer, and then the remaining wet ingredients. Fold in the flour, ground almonds and baking powder and that's your basic cake mix done. So you can see at this point that you have a traditional creamed cake batter that can now be used with a lot of different ingredients.

I tried to copy KateBird's beautiful chevron design, with mixed results, but overall I think it came out looking quite dramatic. I cut my rhubarb into 1-2" chunks and then did a sort of chevron design. Really, I think that tart rhubarb is so beautiful, with such a stunning colour, that any pattern will look simply perfect. I love to serve it for afternoon tea with some cucumber sandwiches (or at least, in my head, I like to think that I'm that classy!) and it makes a perfect coffee cake.

I hope that you enjoy making my easy vegan rhubarb cake recipe as much as I did! 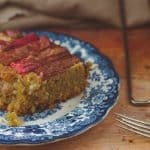