Vegan overnight Caramel Rolls. I like to make life easy for myself, and I've often thought in the past that baking with yeast can be a little overwhelming. My vegan overnight cinnamon rolls recipe, with optional salted caramel/pecan sauce, is one such recipe. It is a yeast dough, but it is a joy to work with, and it has the bonus of being able to prep the night before. I love a breakfast that's ready to go the next day, as I am not a morning person!

This recipe is a hybrid: my own vegan classic cinnamon rolls recipe, and an old family caramel roll recipe. I first tried caramel rolls many years ago in Wisconsin, warm, straight from the tin, and they were amazing. I have changed up the recipe for vegans, and they are good.

There are two options: plain cinnamon rolls (although there is NOTHING plain about cinnamon rolls), and the caramel/pecan version. Now I'm not saying these are the world's easiest and most delicious cinnamon rolls, but they are pretty darn close.

Instant Yeast, make sure it's freshly purchased. I prefer the type in sachets as this stays fresher than the containers.

There is nothing better than warm cinnamon rolls on Christmas morning, but these taste great any time of the year, and they are delicious cold too!

Try my other easy vegan breads 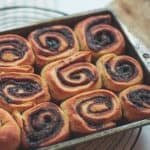 To make the Caramel Rolls