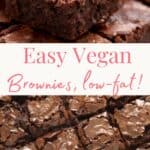 Best vegan chocolate brownies recipe. Possibly the most perfect of all the ways to indulge in Theobroma Cacao. The chocolate hit in a well-made brownie is so strong it can feel like you’ve just downed three double espressos in less than 10 seconds flat. And there’s the non-prep side of things. It takes no time at all to whip up a batch of brownies and even less time to devour them. The only difficult part is melting the chocolate...and how difficult is that?

Of course, there is a downside to such a simply wonderful cake. Brownies don’t look like much other than brown, heavy, stodgy bits of brick. But think again! There lies within a simple, evil genius. People unfamiliar with the Brownie may overlook it once, but once bitten, never again shy.

The characteristics of the brownie, whether it’s chocolate or otherwise (blondies also exist and are just as yummy) is that moist, almost undercooked middle that takes very little time to get used to. This is where I always have problems. 9 of my brownies out of 10 are nearly always under or overcooked. I adore that crackly top and squidgy middle so much that I have strong reservations about leaving them in the oven for the stated cooking time in the recipe. I need to learn to just trust the process.

The worst thing that can happen is that you undercook your brownies and then have a sticky brownie pudding, or you overcook and you have cakey brownies. Either way, you will still have a delicious disaster that is completely edible! To me, the best part of a brownie is the crispy edges anyway! These are just the most perfect vegan brownies to satisfy any chocolate craving and if you love chocolate desserts, you will go crazy for these!

These brownies are from the Erickson family cookbook, a delicious and guilt-free way to enjoy Chocolate Brownies. And - bonus!! - they're really low in fat! My applesauce brownies are virtually oil and butter free! Of course, if you wanted to, you could stir through half a cup of walnuts, hazelnuts or pecans, or even some vegan chocolate chips.

These fudgy vegan brownies are prepared in no time at all, so your chocolate cravings could feasibly be satisfied in 30 minutes or less, and the vegan butter element is replaced by unsweetened applesauce. 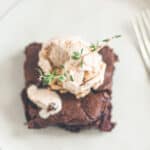 The Best Vegan Brownies Ever