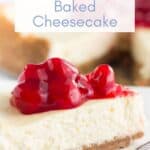 Easy vegan baked cheesecake. Another classic dessert that has suffered the indignity of being sold re-hydrated in packets (just stir and see!) is the cheesecake. There are many different permutations of preparing a cheesecake, some involve being cooked within a bain-marie, and others are served with no cooking at all. Some are flavored and tinted. My favorite is what is traditionally known as a New York Cheesecake. This cheesecake is simple, creamy beyond belief, and tastes a lot like homemade vanilla ice cream but is made wonderfully tangy with the addition of some lemon juice and zest. Served with a simple fruit compote, it is a perfect, sophisticated dessert.

I use my favorite brand of plain vegan cream cheese, Violife, but please use your favorite. I have added silken tofu to add a creaminess, but more importantly, it helps the mixture setup during baking. Tofu is so good for this, I love using it in making vegan quiches too.

My easy vegan cheesecake recipe can be prepped in 10 minutes, and whilst it has to be chilled before serving (once baked), it makes it a perfect bake ahead dessert.

A good cheesecake has a rich, creamy filling, full of tangy, vanilla flavor with a delicious crust. My vegan version checks all the boxes, using simple cheesecake ingredients, and no faffy techniques like a water bath or lining a spring form pan with aluminum foil.

This is a basic vegan cheesecake recipe, allowing you to make your additions. I added a swirl of rhubarb puree onto the top of the cheesecake mixture before baking; you could use lemon curd or raspberry sauce, or just leave it plain and simple. However you modify your vegan baked cheesecake, you are guaranteed a perfect vegan dessert, just remember to make it the day before you need it!

To make the crust

To make the vegan Cheesecake filling