I used to find Pumpkin Pie to be a little anti-climatic, possibly because it is not part of my foodie heritage and to that end, many Americans are not big fans of our Christmas Pudding.

It is an interesting nuance of our foodie cultures that we expect certain foods at specific times of the year, otherwise it would seem as though something were missing. For example, I loath Christmas Cake, can't stand it, but I love the stirring and baking ritual of it, the smell of spices filling the kitchen as it cooks.

Likewise, I find the pumpkin/eggy mixture to be a little cloying. One slice is always more than enough. Curiously, I adore Custard Tarts, Pastel de Natas, with their burnt cream tops, and Pumpkin pie is merely an orange extension of that ancient tart. Making it vegan, i.e. removing that rich, eggy element transformed the Pumpkin pie for me though. My version is lighter, and the flavours that shine are purely the pumpkin and the spices. T

The traditional pumpkin pie is steeped in history, just as our Christmas Pud is. The first European settlers (eventually deciding to live on the Plimoth Plantation in New England in 1621) discovering how the American Indians made great use of this fantastically shaped gourd, the Pumpkin, found it incredibly versatile, and used it in both sweet and savoury dishes.

The American love of pies goes back many hundreds of years so it comes as little surprise then that the settlers used simmered pumpkin flesh in a pie of sorts. In those formative days, they would not have had ovens, so they may have filled the hollowed out shells with the flesh simmered with milk, honey and spices. This would have then been baked in hot ashes and produced the earliest variations of Pumpkin Pie, albeit a pie without a crust.

The first mention of a pie crust (or paste) being filled with pumpkin, was in 1651 and not by a Settlement wife, but by French chef, Francois Pierre la Varenne:

"Tourte of pumpkin - Boile it with good milk, pass it through a straining pan very thick, and mix it with sugar, butter, a little salt and if you will, a few stamped almonds; let all be very thin. Put it in your sheet of paste; bake it. After it is baked, besprinkle it with sugar and serve."

In 1796, some 140 years later or thereabouts, the first American Cookbook was published, American Cooking by an American Orphan (actually Amelia Simmons) and she notes, not one, but two recipes for Pompkin Pudding (sic):

Pompkin Pudding No. 1. One quart stewed and strained, 3 pints cream, 9 beaten eggs, sugar, mace, nutmeg and ginger, laid into paste No. 7 or 3, and with a dough spur, cross and chequer it, and baked in dishes three quarters of an hour.
Pompkin Pudding No. 2. One quart of milk, 1 pint pompkin, 4 eggs, molasses, allspice and ginger in a crust, bake 1 hour.

Her charming recipes are very similar to those we utilise today, securing the Pumpkin Pie's place in culinary history as a true American Classic. However, being a classic simply isn’t enough for some of us and this age-old recipe has been tweaked, primped and altered beyond all recognition.

My vegan version is as close to a traditional pumpkin pie as possible, with a flaky, buttery crust, and a soft, gently spiced pumpkin filling. It is the perfect pie for the holiday season, or if you are looking for a recipe for your vegan friends!

If you love to bake pies but haven't tried my easy vegan pumpkin pie recipe yet, I highly recommend you give this a go, it uses simple ingredients and is so quick to put together.

Here’s the recipe, post-Thanksgiving or not, it’s a great way to use up any old cans of pumpkin you might have lying around, or to utilise them big ol’ gourds that you wondered if you could actually manage to grow this year. Some people also use sweet potatoes. If you do, you need to boil them first, then peel and measure. My American family members used to swear that sweet potato has the best texture for a "pumpkin pie", although I think, at this point, it's just a sweet potato pie!

For other vegan festive recipes: 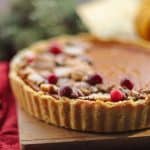 The Most Delicious Vegan Pumpkin Pie