Easy vegan Sag Aloo: a gently spiced vegan Indian-inspired potato and spinach dish that you can serve as a main or as part of a feast, so quick to prepare

So, on those days when you come home from another bad day at the office, beleaguered and barely able to think about cooking but your stomach is telling you "feed me right now!" you need something comforting but tasty. You don't want chocolate (OK, so maybe you do, but you also need nutrients and something flavourful), you don't want (or can't afford) a takeaway and toast and peanut butter seems like a band-aid on a decapitation.

Enter Sag Aloo! From what some of my American friends tell me, Indian food isn't as popular in the US as it is over here, but is slowly growing in popularity. With Chicken Tikka being adopted as one of the UK's top ten indigenous dishes, Indian food is to British cuisine what hamburger is to the bun.

Yet many people choose not to cook it at home. Perhaps people are scared off by the seemingly endless lists of exotic spices, the slow cooking, the heat or the amount of vegan ghee (clarified butter) that is so crucial to achieving that distinctive Indian flavour.

Whatever the reason, I am here to prove that there is such a thing as a quick supper that is both delicious, satisfying and which, once you've tried it, you will want to incorporate into your regular menus. Still not convinced? How about this: the dish I am about to reveal uses only two spices, both of which you will have amongst your collection of spices, particularly if you are keen on home canning.

"Again with the waffle and preamble!" I hear you wail, slightly too loud, I might add.

What is Sag Aloo?

The dish? Sag Aloo. The variations on this basic recipe are incredibly versatile. So versatile in fact that there is a blog devoted to finding the perfect recipe for Sag Aloo.

I am not sure how authentically Indian Sag Aloo actually is. It seems to me that Indian restaurants, in the tradition of Chinese restaurants, have developed this dish for the potato-loving European market. I can only offer as proof of this the fact that they use Turmeric, Mustard Seeds and a little Cayenne Pepper as the main source of flavour. Both are quintessentially British spices, and, along with curry powder, used since the days of Empire.

Whatever the actual origin (and I'm sure someone will correct me if I'm wrong), there is no doubt that homemade Sag Aloo is a far superior dish to the flabby, insipid versions you find on the supermarket shelves, where the potatoes are cooked literally to the point of collapse.
Instead of using a floury potato, which seems to be the norm, I used Anya Potatoes which are a hybrid of the Pink Fir genus. You could replace this with a decent salad potato, or a spud which retains its firm texture without crumbling but with a nutty flavour.

The Sag element of the dish comes from the addition of cooked and chopped spinach which is stirred amongst the potatoes, offering it's emerald green goodness to the pan.

A final swirl of plant based yogurt and a wild sprinkling of coriander to the cooked potatoes coheres all the ingredients together.

I am always amazed at how few ingredients are needed to produce such stunning food and feel that my own hubris is grounded in reality - it's just all the elements working together in an alchemical fusion. I simply placed them in a pan and let them get on with it. Ingredients are like schoolchildren. Some get on like a house on fire, hanging out at sleepovers, getting drunk down the park together, falling in love whilst others just bully the weedier ones, or they are bolshy troublemakers. Some are so quiet that you don't even notice they're there, and 20 years later you can't even remember their names.

Anyway, if you wish to recreate this one-pan dish for lunch or supper here's how. Oh, and I think it would be really good served with some baked tofu or tempeh, something that's been given a loud spice rub. 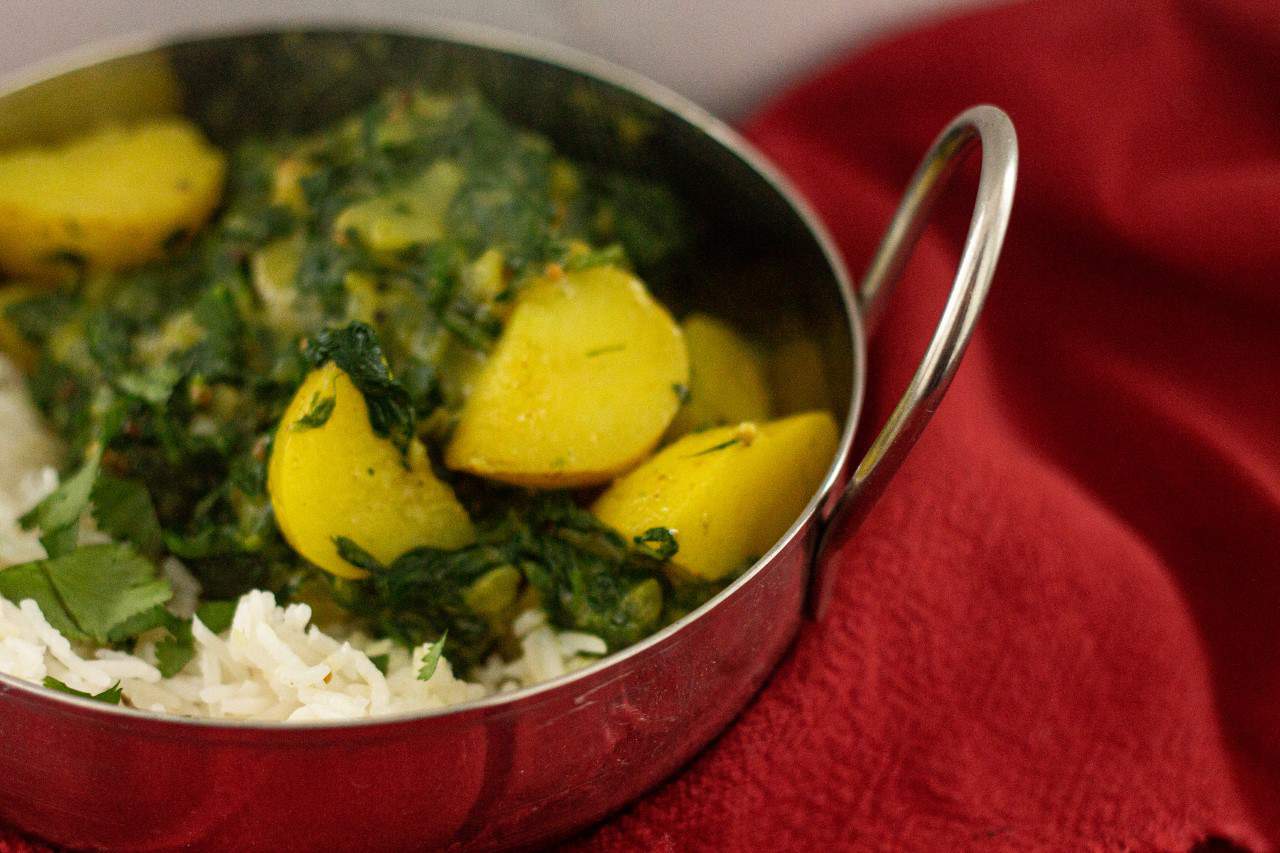