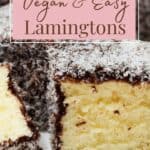 Easy vegan Lamington recipe. Lamingtons - a vanilla sponge coated in chocolate and coconut, easy and fun to make - so easy to eat!

Sometimes nothing else will do. It has a child-like simplicity that never fails to win me over. Perhaps it takes me back to those childhood days when a cake was a special treat: my grandma's Victoria Sponge or Coffee Cake (note: this is a plain but tender sponge cake flavored with coffee and filled with coffee buttercream) or perhaps the cake I insisted that my Mum made for me every single birthday: the Hansel and Gretel chocolate house. I insisted that the chimney always went to the birthday girl, a small square of sponge with about an inch of buttercream icing used to cement it to the top of a rickety cake roof.

Later on, my Mum discovered the joys (and simplicity) of the Lemon Drizzle Cake, a cake with such longevity that we would be eating it two weeks after it was baked and it still tasted great.

England is a country of cake eaters. We love dense fruit cake with virginal royal icing and marzipan, and we enjoy the daintiness of Fairy Cakes (although these have been somewhat usurped by the ubiquitous Double-Choc or Blueberry Muffin in recent years) and Chocolate Cake holds a special place in the hearts of dumped females the country over.

Yet, it still seems that the ratio of people buying cakes compared to baking them is top-heavy. People seem to fear baking as though it were a sophisticated French technique. Indeed, there is a certain art to icing cakes but there is nothing at all to creaming some butter and sugar together and folding in some flour. I have said before that baking becomes more like second nature as your confidence improves and don't the cakes that our mothers and grandmothers bake(d) taste so much better than their chemical-laden shop-bought variants?

I am living proof that practice does indeed make perfect. I have had many disasters in the kitchen but as you grow more experienced, you learn certain pitfalls and specific methods, and your success rate grows exponentially. Remember that you are in charge of the ingredients and not the other way around.

One Christmas, about 6 years ago, my Mum bought me a cookbook, simply entitled Chocolate. I remember baking several disastrous recipes throughout the Christmas Holiday, including a Dobos Torte (which was a clear case of running before I could walk) that resembled a stack of malformed pancakes. I did, however, bake an Almond and Hazelnut gateau that was successful if not pretty. It was my first truly delicious cake and I haven't stopped baking since.

That Chocolate book was long filed away as it became replaced by Delia Smith, Nigella Lawson, Tamasin Day-Lewis, Elisabeth Luard, et al. But, whilst searching for an Andy Warhol book the other day, I stumbled across the Chocolate book once more and fell upon it, lavishing its dusty pages with kisses. It was like being given a brand new book.

I spent hours salivating over the 250+ pages of chocolate cakes, mousses, gateaux, cheesecakes, crepes, and soufflés, all of which seemed perfectly cookable. Recipes that, five years ago, seemed grueling, now seemed achievable. I allude this to my time spent with the Daring Bakers, time which has boosted my confidence and skills immeasurably.

Whilst I bookmarked every page in my new find, there was one cake that I had always wanted to make, long before I had even received this cookbook. The memory of this cake lurks in my mind from the days when I would return home from school, hug our Labrador Monte around the neck, and then sit down to watch an Australian soap opera called Sons and Daughters. Notable, like most soap operas from the early 1980s, were, for having wobbling scenery and badly written scripts, this was compulsive viewing back in those grey days of television.

What I remember most of all was that when the characters in the soap would sit down for tea and a chat, they would always eat a gooey, chocolatey, coconutty cake called a Lamington. And no matter how much I pleaded with my Mum to bake some for me, she always refused, citing grounds of getting her fingers icky. And I can see her point.

The Lamington is another one of those legendary foods, the origin of which is strongly disputed depending on who you talk to. Some say that a fortuitous but clumsy accident involving the 2nd Baron or Lord Lamington dropping a cake into a terrine of gravy and then into desiccated coconut inspired this cake, others say that it was named after the aforementioned Baron for his taste in headwear, the cake resembling this favorite titfer.

A slightly more believable story comes once again from the kitchen of Baron Lamington, a thrifty cook from Queensland Australia, utilizing stale cake by rolling it in a chocolate coating, then coconut to disguise the dry gateaux. It was hailed a success and history was supposedly made that day. The Baron himself though didn't like the cake or the honor of having them named after him, and referred to them as "Those bloody woolly biscuits."

More fool him because these delightful squares of goodness deservedly take their place in the International Cake Hall of Fame. And you don't have to use stale cake these days either.

In short, a Lamington is one of those delicious traditional Australian desserts that is deceptively simple to make. Squares of vanilla sponge cake dipped in a rich chocolate icing, then rolled in coconut. Some recipes use a strawberry jam coating and then coconut, but this chocolate vegan version is my favorite.

Some recipes call for a chocolate sponge but the classic lamington is traditionally made with a vanilla sponge. This is the best vegan lamingtons recipe you will try, no one will know it's eggless, and they will rave about the chocolate and coconut coating!

Note: this smooth batter is quite thin, so don't worry.

Once you have baked your cake in a square tin and it is completely cold, using a serrated knife, cut it into 9 equal squares, leveling off the edges if need be.

You can cut them into smaller cubes to make lamington bites if you prefer!

This process is messy. There is no escaping that. However, you can make clean-up a little easier on yourself with a bit of planning.

Try my other delicious vegan cakes

To Bake the Cake