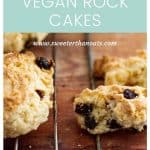 Vegan Rock Cakes, buttery, sweet, old-fashioned and so simple to make, I love cakes that remind me of my nan and this was her favourite recipe!

If you love these simple old-fashioned bakes, you might like my spiced cake buns, Chelse Buns, vegan apple crumble or traditional vegan Eccles cakes or sultana loaf, all of which are so simple to make!

Rock cakes are little cakes for the tin that last for about a week, or however long your family can resist them! My grandma made them for many, many years, seemingly without using a recipe, just eyeballing the ingredients until the dough felt "right" and then dolloping it out on baking sheets.

But What Are Rock Cakes?

You may have encountered Rock cakes in cookery classes at school, where some of the first things you learned to cook were cupcakes, buns or rock cakes, their simplicity and almost foolproofness making them perfect for indelicate little hands to make.

Mrs Beeton has a recipe for them in her classic 1861 Book of Household Management, so one would assume that the recipe is actually from further back than that.

In fact, they became extremely popular during the second world war as a cheaper treat, the traditional recipe only uses one egg (which I've replaced here with egg replacer), and little sugar, relying instead on dried fruit to add sweetness. My recipe does use a little more sugar because I prefer them on the sweeter side, but feel free to halve the sugar quantity if you'd rather.

Because they are nubbly, bumpy little cakes, they were given the rather unappealing name of Rock cakes, which doesn't really do the flaky, sweet texture justice! However, one bite of them, especially straight from the oven, and you will fall in love with this simple, old fashioned treat. Crunchy on the outside, meltingly soft on the inside, I love them plain, but my grandad loved his served with a little strawberry jam and butter, a bit like a scone!

What is the difference between Rock Cakes and Scones?

Rock cakes are very similar to scones (see my recipe for vegan scones here) in both taste and texture, light, sweet, flakey, slightly crumbly, buttery cakes, studded with raisins and dropped in dollops onto your baking sheet. That's where the difference is between scones and Rock cakes (also called Rock Buns): Scone dough is rolled out and rounds are stamped out using cutters, giving a uniform shape that is perfect for splitting and filling with jam and cream.

They are so easy to make, and Rock Cakes are easy to make vegan too! I love any sweet treat that I can make in less than an hour and these definitely fit the bill.

Yes! Simply exchange the flour for your favourite gluten free flour mix. You might need to add a little extra milk to bind the mixture, as GF dough can be a little bit crumbly and temperamental to work with!

Additions to your Rock Cakes

You can personalise your Rock Cakes in several different ways!

Can I freeze vegan Rock Cakes?

You can! They freeze really well, just bake and cool them completely. Place them in a freezer safe container. To thaw, simply remove how many you need from the freezer and bring up to room temperature. You could warm them through in the microwave if you like .

Yes! Simply use your favourite gluten free blend of flour. You may need to add a little more milk to help the mixture become cohesive. 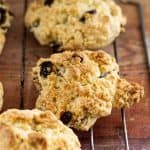 How to Make Vegan Rock Cakes