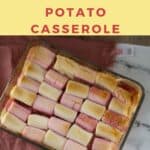 Sweet Potato Casserole? Don't knock it until you've tried it! And if you have tried it, you'll know just how good it is! These is a simple, vegan recipe, perfect for a side dish for Thanksgiving, and always loved by kids!

I have always had this thing for salty/sweet foods. As a wayward youth, I would dip McDonalds French Fries into their thick chocolate shakes. I have also been guilty of eating chocolate bars with a packet of ready salted crisps. And of course, I adore anything that combines peanut butter with chocolate.
However, this strange compulsion did not manage to reach the dinner table. That is, until Sunday.

Cooking an ad-hoc and very late Thanksgiving Meal for myself and a couple of friends, I was asked to prepare sweet potatoes with marshmallows, green bean casserole and cranberry sauce. It was the least I could do, considering I refused to cook a large turkey and forgot to make any stuffing to "compensate". Ooops.

Family members have also been requesting sweet potato casserole with marshmallows (known in the US as candied sweet potatoes or yams) for years and for some reason I’ve never actually prepared it, despite there being a plethora of excellent quality vegan marshmallows available.

What is Sweet Potato Casserole?

This year though, I relented and got to work. The sweet potatoes are drizzled with a little olive oil, wrapped in foil and baked at a reasonably high temperature until meltingly soft. The orange flesh is then stripped easily from the skin and whipped up with some butter, cinnamon, salt and lime juice. This mash (tasty enough to serve alone) is then topped with marshmallows and seared in a really hot oven for 10 minutes until melty, crusty and browned.

And that first taste? It is like an explosion of flavour on the tongue. Every mouthful offers complete and utter satisfaction, whether you smear a dab of it on the stuffing (ahem), nut roast, mix it with a little mashed potato or just savour it alone. Quite simply, it is the best side dish I have ever tasted, all other dishes fading into simple mediocrity when pitched against this ambrosial treat.

Furthermore, the dish transported me, via its heady, scented taste to America, where I have never eaten them before. I have, however, smelt this cinnamon sweet smell all over the US at Thanksgiving. A simple, sweet aroma that I truly gave thanks for.

The best thing about Thanksgiving? I never thought I would say this, but the leftovers. Our guests were sitting on the fence about the sweet potatoes (but they loved the green bean casserole) and apparently aren’t as fiendishly desiring of vegetables in various states of mashed-ness. The next day, I fried up the mashed potato and mashed parsnip (another fantastic way to serve this underused vegetable: boil until tender, then mash with lots of butter, salt, pepper, nutmeg, dash of maple syrup and a small glug of brandy or rum) with some leftover brussels sprouts: a slightly different version of Bubble and Squeak. This was served alongside the reheated sweet potato marshmallow nectar (still just as good), and some baked beans. Sure, it was a little strange but it was more than just a little great. And not just for Thanksgiving.

If the taste alone isn't enough to get you try it, there are the health benefits from eating Sweet Potatoes (if you minus the marshmallows). They are rich in complex carbohydrates, Vitamin C and Vitamin B6 plus Beta Carotene. In 1992, the sweet potato ranked highest, compared to other vegetables, for nutritional content and benefit. They are incredibly good for diabetics (definitely minus the marshmallows!) as they can stabilise the blood sugar levels too.

And if you’ll excuse me, I have to go out and buy some sweet potatoes – I have half a bag of marshmallows that desperately need using up.

Can I use regular potatoes?

My answer would be sure, but I don't think it would taste great! Normal potatoes are much less sweeter than their sweet counterpart (hence the name), and just would not work well with marshmallows! Save your white potatoes for mash!

What else can I serve sweet potato casserole with?

Hmm. Good question. I think it would be great served with any other deeply savoury dish, meatballs perhaps, but it really is perfect served with a thanksgiving nut roast.

Try my other delicious Thanksgiving ideas 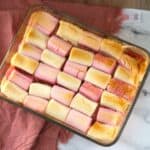