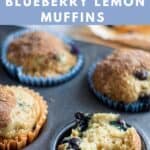 The quickest soft and fluffy vegan blueberry muffins you'll ever make - fresh from the oven in less than half an hour, including prep!

Who doesn't love blueberry muffins, the most ubiquitous of the coffee shop cakes, but sometimes I find they can taste a little bit synthetic. My version uses only fresh blueberries, and store cupboard vegan ingredients.

This was inspired by my lemon poppyseed muffins and my beetroot muffins and also pairs well with my healthy vegan breakfast muffins!

Honestly, is there a more iconic baked good than the blueberry muffin? So iconic, in fact, that it might take down a slice of cherry pie in a throwdown. But not all blueberry muffins are created equally. Most have egg and butter in, and some are dry, some are stingy with their blueberries and others are just overpriced.

These are the best vegan blueberry muffins because they are none of those things. They are tender, with enough blueberries to satisfy every bite, are eggless and dairy-free and use store cupboard ingredients. Lemon zest adds a freshness to the flavour, and a delicious cinnamon/sugar topping gives you a sweet and crunchy muffin top that is irresistible!

I love that this is such a short ingredient list and that I can prep them in a little under 5 minutes. It makes baking so simple.

Place into oven at 350 fahrenheit

I like to use a muffin pan that is fairly deep, giving you a nice rise on the muffins. Some recipes don't use muffin liners either, instead spraying the tray with a little oil and the flouring. This is a perfect option if you are concerned about the sustainability of muffin liners. They also freeze better out of the liners too.

To ensure that the correct amount of blueberry muffin batter is dispensed into each cup, I like to use either an ice cream or muffin scoop. You could also use (in this instance) a quarter cup measure. But I just use my vintage ice cream scoop.

Store the baked and cooled muffins in an airtight container. They only really last a couple of days though because they contain fresh fruit.

Muffins that won't be consumed within a couple of days can be frozen, and thawed out at room temperature.

Make your muffin batter the night before, but don't add the blueberries until you intend to bake them. If you add fruit the day before, it will break down and stain the the batter. 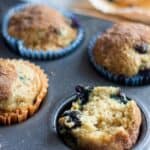