Easy vegan Anzac biscuits. Anzac Cookies are a delicious, oaty, and naturally vegan biscuit (or cookie, depending on your location), that is as interesting as it is scrumptious.

Anzac Cookies are as antipodean as kangaroos, Peter Jackson, or Neighbours, being named after the Australian and New Zealand Army Corps acronym. During the first world war, they were produced for the soldiers as a nutritious and somewhat tasty food source, during those long, dark days.

According to a fascinating article in the Guardian, the biscuits reached the soldiers, not always in the most pristine condition, and were commonly referred to, in more polite terms, as hard-tack, jawbreakers, dog biscuits, or the rather tongue-in-cheek, Anzac wafers. A wry nod to them being anything but light and airy like a wafer.

The article goes on to further note:

“They were so hard soldiers would grate them into tea to make “trench porridge”. In Discovering Gallipoli Research Guide the hard-tack biscuit was described as “one of the most durable materials used in the war, reputed to be bulletproof!”

Anzac Day is celebrated on April 25th, a day of remembrance, where no doubt copious amounts of traditional Anzac biscuits are consumed. And perhaps the most fascinating thing about Anzac biscuits is that they are still as popular today, some hundred years after they were first produced for the soldiers, a biscuit that still binds in the memory the past with the present.

This is a classic vegan Anzac biscuit recipe, using a melted butter mixture mixed with coconut, white flour, and oats.

They are really simple and quick to make!

This is such an easy recipe. You can whip up a batch of Anzac biscuits in less than an hour.

Yes, you can make this delicious crunchy cookie gluten free because the cookies are not supposed to be “cakey” in texture, and they are already packed with coconut and oats, you could use your favorite gluten-free flour blend. You could also use coconut flour, oat flour, or even brown rice flour mixed with a little potato starch.

Also, ensure that you use gluten-free oats though! 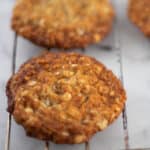 How to make Vegan Anzac Biscuits