Vegan Jerusalem artichoke soup recipe. Creamy and comforting with a unique flavour, make the most of Jerusalem Artichokes this season with my delicious and simple soup.

It's November and we're starting to see the winter roots in the veggie markets. I am unnecessarily thrilled that new potatoes have currently left the party, and we can enjoy large, fluffy baked potatoes instead.

Of course, we've all tried these, but have you ever looked at the nobbly little Jerusalem Artichokes (also known, charmingly, as sunroot, sunchoke, earth apple or wild sunflower) and wondered, what on earth do these taste like?

Texturally they are not like potato, nor are they anything like Globe Artichokes. Rather, they are more like a taro or cassava, quite starchy, with a flavour that is a cross between a baked potato and a chestnut. It's quite unique, quite delicate but it adds a delightful savoury flavour when combined with other soups.

How do you prepare Jerusalem Artichokes?

Much like chestnuts, Artichokes, whether they're Jerusalem or Globe, can be a pain to prepare/eat.

How to Prep Jerusalem Artichokes

I have a method which reduces some of the faff of preparing Jerusalem ones though.

This is my recipe for Artichoke Soup, topped with my delicious Truffled Sourdough Crouton crumbles. It is thick, hearty but also deeply luxurious. What I love about this soup is that you can make it ahead of time and freeze it. It makes a perfect starter for a festive meal, warm and comforting, yet slightly decadent with the truffly scented croutons. And if you were considering buying a jar of truffle paste, here's my recipe for delicious Truffle Triangles, or Yummly have ten more truffly suggestions that might tickle your tastebuds! 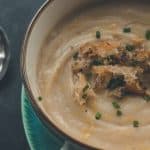