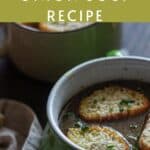 Vegan French Onion Soup is a delicious and simple classic dish that can be made several days in advance.

This traditional French soup has been in existence since the Roman times, making it one of the most enduring dishes of all time. And with good reason. When made well, onion soup is rich, hearty, comforting and classy.

What started off as a dish made out of necessity (onions grew readily, and were cheap) became elevated in the 18th Century when rich ingredients like bone stock, brandy and butter were added. The crouton that bobs temptingly on top of the soup is a non-negotiable. Half the fun of eating a French onion soup is trying to eat the crouton delicately (tip: don't worry about it).

If I'm trying to watch what I'm eating, I find that (reducing the butter a little) French onion soup is a hearty option (but please keep the carby crouton), and is on rotation with Mollie Katzen's No-Chicken Soup as well.

As far as I'm concerned, a section of soups must include French onion. It is one of my favourite soups and one that I have made for many years.

Onion soup can be tricky though, despite its seeming simplicity. My mother-in-law referred to it once as tasting like beef consommé and there is certainly little point in eating the tinned stuff, which is basically beef stock with some token onion flakes sprinkled in it for good measure. I'm not sure I could really understand why this exists except to make a base for other soups!

I have made onion soup without stock and with stock and, providing you cook the onions slowly, over a low heat, you can be guaranteed of a rich flavour either way.

Of course, as far as I'm concerned, the soup merely exists to mop up the cheeze-encrusted croutons that float on the top. I usually like my croutons large. I just get great pleasure from tearing into the bread which has a soggy underbelly from the soup.

A perfect dish for a winter's day.

Sauté the onions over very low heat until they are golden and soft and sweet.

Add the stock and some seasoning and simmer for 30 minutes

Taste for seasoning, then top with croutons

Hint: you can make this soup 2 or 3 days in advance, just keep it refrigerated, and reheat gently when needed.

Good for 2-3 days in the refrigerator.

You can freeze this cooled soup in a Ziplock bag, thawing out in a saucepan overnight.