How to make delicious vegan Gumbo using a classic roux, okra, peppers and yummy vegan chicken pieces. Easy to prepare and so good!

It may seem inappropriate to some, but to me Cajun food will always represent the holidays. It started back in 1986 when I was staying with a friend during Thanksgiving. His family had some Cajun friends who were hosting the festivities that year. What I experienced was the quintessential holiday experience. The food was really sublime and the mood was uniquely festive. I have rarely encountered such genuine and generous people in the years since and I will always remember how great that Thanksgiving was.

I can't think of anything better to have with gumbo than some vegan smokey collard greens on the side, and of course, vegan cornbread.

I have always had a weakness for hot food especially if it was somewhat esoteric. This was probably the result of growing up in a family that celebrated cultural diversity. As a child my parents always had a room to spare for an exchange student and I longed every year for the International Banquet held at the university where my parents were employed. I wish there were still opportunities like that at my disposal!

Although Cajun food never had representation at any of these banquets, it wouldn’t have been misplaced. The cuisine of this region was formed by an amalgamation of food from North America, Europe, and Africa. Although the word Cajun is a corruption of Acadian (The name for the area of Nova Scotia settled by the French), few people outside Louisiana realise that Cajun heritage is derived from German, Spanish, Native American, African, and French culture.

Despite the fact that the migration of the French from Acadia occurred in the mid 18th century, the cuisine of this region didn’t become part of the mainstream vernacular until the 1990’s. It then flirted with acceptance for a year or two and quickly fell out of favour. I think the acceptance of this food and the subsequent rejection can both be attributed to the same thing: health. The initial intrigue was very likely a reaction to the bland and boring health consciousness of the 1980’s. The rapid fall from grace for Cajun food was probably the result of the next wave of health food fascism that swept the country again in the 1990’s.

Recently however, Cajun cuisine has experienced a resurgence in popularity, and not just in America. British chefs are preparing these dishes with increasing frequency as well! This can be linked to an increasing appreciation of French country cooking and the campaigning of chefs like Keith Floyd in the UK and Emeril Lagasse in the US. And hopefully the public is finally ready to wake up to the fact that the secret to a healthy diet is moderation, natural ingredients, and balance. Maybe studies such as the recent analysis of the French Paradox have something to do with that.

I owe my love of Cajun food to two things. A cold Thanksgiving with a nice family and one of the greatest television chefs ever, Justin Wilson! My gumbo recipe is adapted from the versions I watched him make on PBS when I was younger. Gumbo comes in many varieties and has a very fascinating history and etymology, but I am not going to disgrace this fantastic cuisine by purporting to be an expert. There is a lot of information available online.

I’m sure that genuine Cajuns wouldn’t be happy with my version of the grand pappy of their cuisine, but in the final analysis I think the simplicity and heartiness would meet with their approval.

What is a Cajun Roux?

A Cajun Roux is very similar to a French style roux (as used in white sauces, such a Bechamel), in that you mix oil with flour, thereby creating a thickening agent for your sauce.

A Cajun Roux is different, however, in that you cook the roux until it darkens, so it infuses a quite distinctive flavour to the sauce. You will know when your roux is ready, it will start to smell a lot like freshly popped popcorn! 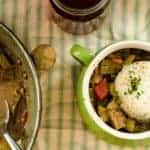