Vegan puppy chow recipe. I first heard about this strange looking, strange named snack a couple of years ago. An Instagram friend from California had made a huge bowl for the holidays. This bowl contained white, dusty coated squares of something or other and I had never seen anything like it before. I asked Kate, what on earth is that, and she explained that Puppy Chow is a cereal-based snack, coated in chocolate, peanut butter and a LOT of icing sugar.

I mentally made a note to look up how to make Puppy Chow, but then forgot all about it, and so here I am in January, on a sugar detox, making a bowl of this sugary delight.

What is Puppy Chow?

If you're from outside of the Americas, you may never have heard of it. Puppy chow is a sweet snack, also referred to as Muddy Buddies, made from an American cereal called Chex. Now us Brits don't have Chex. However, we have Shreddies, which are an oat-grain based cereal, flavoured with malt. They're not too sweet, but have a firm, unrelentingly crisp texture.

The cereal is coated draped in melted chocolate and peanut butter, then doused with icing sugar, giving it the white, powdery finish.

So yes, this is not a snack for the faint of heart, it is very calorific, very delicious, but, because the pieces are small, you can be strong and restrict yourself to only three handfuls a day....!

How do you make Vegan Puppy Chow?

It's easy! And very similar to traditional recipes. Melt dark chocolate chips (I always use Callebaut 811 semi-sweet chocolate chips that do not contain milk) and peanut butter with some vegan butter. I'm currently using Flora Plant-Based, but whatever your preference is. Pour this over your Shreddies and coat thoroughly.

Tip: leave to cool for a couple of minutes or until at room temperature. If the chocolate mixture is still hot, when you add the icing sugar, it will just melt and soak into the chocolate rather than coat it.

Dust liberally (and I mean liberally) with icing (confectioners) sugar until you have an ethereal looking bowl of this divine treat. You can knock up a batch in less than 15 minutes.

Chocolate. You can use different chocolate of varying percentages. 70% will give you a darker, richer flavour, but I'm not sure it's worth it for something you'll be smothering in icing sugar.

Peanut Butter. You can use whatever nut butter you prefer. I used supermarket own brand in smooth, purely because I'm a bit of a heathen when it comes to PB, and I do like the cheap stuff! If you have a nut intolerance, you could use seed butter instead.

Cereal. Obviously if you are reading this and you are in the US, you will have a variety of cereals at your disposal, including both Chex AND Shreddies. I have read other recipes that use Cheerios too. You could use Shredded Wheat Bitesize too. I would recommend using an unsweetened cereal, purely because of all the additional sugar you are adding, it will just be one layer of sweet too many!

Sea Salt. Now I add a good pinch of Maldon sea salt to my melted chocolate. This is because the Peanut Butter I used was on the sweeter side, and I wanted to balance out the flavours a bit more. This is optional, but does round out the end flavour.

Add-Ins. Some recipes add M&Ms or mini marshmallows, or salted peanuts, so feel free to add any little extras at the point of stirring the melted chocolate over the cereal. It's hard to find vegan versions of things like M&Ms that are reasonably priced, so I personally wouldn't bother, but if it's for a special occasion, I think it would be a great little texture note.

Doubling the Recipe. I have made a small batch here. Most recipes use a whole box of cereal which is great for family gatherings. The main ratio to remember is that you need the same weight of chocolate as you do cereal. So, 500g of cereal = 500g chocolate chips. The rest of the ingredients, simply double. The icing sugar is a little more inaccurate as it depends on how quickly it absorbs into the chocolate coating. 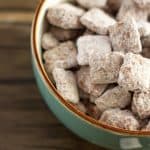