Vegan Creme egg recipe. I have it on good authority that there are people in existence who don't have a sweet tooth. I know! Remarkable, isn't it? If you are one of that rare breed, perhaps you should turn back now. This recipe is just about as sweet as it gets.

As a Vegan, one of the things that I missed the most was chocolate bars, and, for a few beautiful weeks a year, Cadbury Creme Eggs. There was just something about peeling off the foil wrapper and biting messily through thick chocolate into that tooth-achingly sweet fondant filling that was heavenly.

Last year, I read about a mad genius Vegan who had invented a cruelty-free Creme Egg! Whilst the inventor remains anonymous, there are many recipes online, all of which involve a sugar fondant filling and a crisp dark chocolate shell. They are easy to make and a great (if messy) project to get the children involved in.

If you don't have egg moulds, you can use mini cupcake cases instead. Coat the bottom of each case with some melted chocolate, leave to cool, then fill with the fondant and cover with more melted chocolate. They won't look like much like vegan creme eggs, but will still taste divine!
This recipe was adapted from hellyeahitsvegan.com and their vegan creme egg recipe.

How do you make vegan creme eggs?

It's a process, but a fun one, and you do get a great treat at the end! 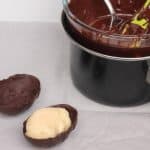