Vegan laverbread recipe. Anyone who has experienced the sheer joy and exhilaration of walking along the beach will be familiar with the ozone, salty smell that accompanies such visits. Maybe you pretended to have been sea monsters by putting seaweed over your hair, running around, gurning madly Maybe you spent ages popping the seaweed or making sand drawings with washed-up seashells.

I don’t think at any point during those youthful shenanigans that I still partake in when I get the chance to visit the seaside, that I considered eating the seaweed. Gritty with sand and small aquatic life (probably), I can't say that I have would have thought a fish flavoured vegetable would pique my appetite.

Laverbread is seaweed. I used to think that seaweed was inedible and existed for the plankton only until I tried sushi.

Who would have thought that rice and seaweed (in the form of Nori) could form such a delicious symbiosis? Well, actually, those of us who remember that fish and seaweed cohabit the, uh, sea or ocean.

Niggling marine-life semantics aside, I still prefer the tempura selection from Sushi bars to the actual sushi. Regular readers will know that I have an enduring love affair with deep frying that I try to keep restrained to a once-a-month treat, lest my cholesterol should start kicking up a fuss and causing strokes and other unpleasantries.

However, I humour my desire for deep-fried food with the occasional consumption of shallow fried food. I know, it actually sucks up more fat than deep frying but if I use olive oil, it's a little bit better, right?

But I digress wildly. We were talking about Welsh delicacy Laverbread. Specifically, Laver is a seaweed found clinging to sand embedded rocks on the Western Coast of Britain. Because the harvesting of the Laver is time-consuming it is not a cheap delicacy, yet it does not wear that badge of sophistication that its more desirable culinary sea buddies, caviar and smoked salmon have worn for years with snooty pride.

Admittedly, when you first open the tin of Laverbread, to be faced with very, very dark gunge that probably resembles a Gila Monsters brain, it could prove to be a little off-putting. A tentative tip of the finger taste reveals a non-fishy but marine-salty flavour tinged with that ferrous iron tang that you get with spinach or curly kale or spring greens.

It is not something I would want to eat straight from the tin, in the same way that I don't particularly like any cooked vegetable served cold from the tin (with the exception of sweetcorn which I can eat with joyous abandon) but according to the labelling, it is referred to as Welsh Caviar (See! It did get its badge of sophistication!), to be served on warm blinis or Melba toast.

The recipe I was interested in replicating was Laver Cakes, the most traditional and tasty way of serving this green gungy sea veg.

How do you make Lavercakes?

Laver Cakes are very easy to make but you have to mix the Laver with some oatmeal first otherwise you'll end up with a huge sticky goo in the pan and on your hands and that would just be disastrous.

I highly recommend that you use pinhead oatmeal which adds a much better texture to the laver cakes than rolled oats.

Assuming that you are unable to source fresh Laver, straight from the slippery, wind and sea thrashed rocks of Coastal Wales, all of the hard work will have already been done for you. The endless rinsing and boiling of the Laver is not yours to worry about. All you need is a can opener and a desire to try new and unusual products.

I served these crisp little rissoles, which when cooked take on an almost egg-yolk taste, with shredded brussels sprout tops and a simple tomato salsa. The cakes are incredibly rich. I made six, using the whole tin and I could only manage to eat two.

The good news about Laverbread is that restaurants are starting to use this nutritious (it is high in iron, protein and vitamins B2, A and C) little sea green more and more. In a fascinating twist, dried purple laver becomes Nori, and is a great source of vitamin B12.

It is used in Risottos, or is simply heavily seasoned with orange and lemon juice (with which it has a natural affinity) and served as a vegetable. It could be used instead of Spinach in Lasagne or as a slightly wacky filling for Ravioli. In Wales and Devon it is just served alongside another Seaside favourite, Cockles.The possibilities for humble Laverbread, it would appear, are endless.

And if you have found yourself foraging on a holiday in Wales, you can try preparing your own laverbread.

Try my other delicious vegan dishes 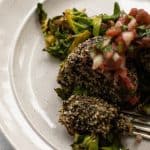