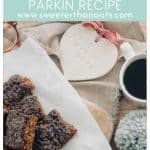 Vegan Gingerbread Parkin recipe. Parkin is an old fashioned sticky cake, made with oats, ginger and treacle and served on Bonfire Night.

Vegan parkin is not really a cake at all, I suppose, or at least, not in the traditional sense. It is an old Yorkshire recipe, dating way back to 1728 officially, but made hundreds of years before: a sort of unleavened but sweetened cake, packed full of oats, instead of flour.

Alison Uttley writes about several different Parkin recipes in her evocative book of childhood favourites, Recipes from an Old Farmhouse. This is a cake that has many variations, and, as with all these recipes, every family one is the best!

Some Boring History About Me

I am fascinated by my family tree and spent some time on the Ancestry app, gathering data about where I came from. It turns out that, weirdly, the male element (my grandfathers) of my family are all local. They rarely strayed beyond 10 miles of where I was brought up. The female side, however, (my grandmothers), moved around much more. On the paternal side, I have heritage in Scotland, and on the maternal side, we have Manx heritage, something I would very much love to explore more.

The reason I am so interested in old fashioned (and I mean old-fashioned in a loving way, not a disparaging way), is that they are so simple, yet always effective, delicious and usually quite quick! My favourite kind of recipes.

Both of my grandmothers, aside from being from "oop north" were also amazing cooks, but also what I call instinctive cooks. They didn't use scales, and just weighed flour using old measuring spoons, and eyeballing the butter or lard. I used to envy (still do!) that skill, but I know that my pastry will never be as perfect as theirs. I just don't make pies on a weekly or even monthly basis, and I don't like making the same recipe over and over.

Parkin is a cake that is more akin to a fruit cake, in that it needs to rest for at least a week or two before it tastes its best.

The method is just two steps, melting the sugars and butter together, and mixing that into the dry ingredients before a long slow bake.

Because Parkin doesn't have any leavening in it, don't expect much of a rise from this cake. What will happen is that the oatmeal will absorb a lot of the flavours and will continue to swell, giving the cake stability and texture.

How do you serve Parkin?

Once you have waited the almost unfathomably long two weeks before you can finally unwrap it (don't forget to diary it!), I like to cut it into squares and serve it with custard. You can also just nibble on it, almost like a flapjack.

Traditionally it is served on Bonfire Night, so you'd be wrapped up cosily, warm duffel coat, gloves, scarf and bobble hat with a chunk of Parkin wrapped up tightly in your coat pocket, ready for when you get a bit peckish. Or maybe waiting for you, with a cup of hot chocolate, when you come in from the cold. 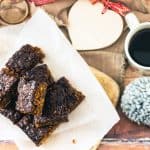