Easy vegan Puff Pastry Asparagus tart. If you’re British you look forward to the first asparagus of the season. Along with Rhubarb and Strawberries, it seems to symbolise the onset of Summer.

Now, I’m not going to treat you like idiots. You all know that the best way to have Asparagus is steamed and dripping with butter but what about when you get sick of having it that way (if that’s possible)? Or how about surprising those people who say that Asparagus is over-rated (my grandparents, for example)? Last night I drove to our local PYO farm shop and bought two bunches of Asparagus to cook in other ways that still highlight the delicacy of this long-limbed emerald beauty.

There is nothing like eating a stick of asparagus in the car, revelling in the slightly bitter ‘flower’ and marvelling at the sweetness of the stalk, so sweet that it almost tastes like pea pods. Later on in the season, the stalk will become woody and you will snap more and more of it off before preparation. For now though, it is another welcome treat from Spring. Katie over at Wholefood Soul Food Kitchen has a beautifully simple asparagus salad that just makes the natural flavor sing.

Other than steaming them, and serving them swathed in melted butter and cracked black pepper, is there any better way to showcase spring vegetables (or any season for that matter?) than in a delicate soup or a tart?

When you roast the asparagus, the flavour blossoms as if it were still growing in the field, reaching for the sunlight.

I toyed with different variations: adding some frozen peas, new potatoes. New season Asparagus needs no such fripperies yet. My one concession to any additional flavouring was a cheezy savoury custard to cradle the asparagus. It just adds another layer of savoury-ness that is sublime.

The tart is simple to make, particularly if you use pre-rolled puff pastry. The Asparagus spears will have bobbed to the top and scorched beautifully in places. Leave to cool for ten minutes then cut into soft, squidgy slices. The custard will not have set solid but instead is wobbly, creamily firm, almost like a soufflé. It is wonderful warm but great cold as well. And it keeps in the fridge (I had just had a slice for lunch). I have also made a more traditional but vegan quiche using asparagus here.

How do you make vegan Asparagus Tart?

As with many vegan recipes that rely on egg or dairy replacers, they are often much simpler than their non-veggie counterpart.

This has no egg in it, rather a creamy saucy base made with vegan cream cheese (I prefer Violife), but in this instance I used Tesco's own vegan version. I added some sauteed spring onions and a little fresh Thyme, then stirred this into my cream cheeze, along with some Dijon Mustard and thickened (and flavoured!) with nutritional yeast. No self-respecting vegan would be caught without Nooch in their store cupboard. It adds an authentic cheese-like flavour to sauces, whilst also thickening. Some people sprinkle it on buttered toast or on their salads as well. It also rich in nutrients.

You don't need to blanch the asparagus first, the heat from the oven will cook it through perfectly.

Asparagus out of season? No problem, try these alternatives:

What is the difference between purple and green Asparagus?

I can honestly say, that using both purple and green in this tart, I didn't notice any discernible difference in flavour, and in fact, the purple lost it's colour after cooking! So you can use any asparagus you like 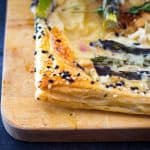