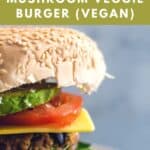 The Best vegan veggie Burger recipe - full of FLAVOR and EASY! These vegan burgers get their authentic texture from a mixture of cooked mushrooms and TVP, and taste fantastic, grill, bake or fry - go big or go home!

I love burgers, I make no secret of that, and I am constantly on a search to find the best vegan/veggie burger out there. Let me tell you that there's a lot out there! With meat replacement products that will fool the most hardened meat eaters. Never has there been so much choice for vegans and veggies to indulge in their favorite foods! If you have guests who love meat, try this good meatless burger recipe. Did I say good? I meant, great!

Why These Vegan Burgers are So Good

I'm not going to lie when I say that I think this is the best veggie burger. Sure, I probably said that about my spicy bean burgers too, but this is the best vegetarian burger that's a bit like a meat burger. It doesn't have too many ingredients and is so easy to prep. The burger is kept juice by adding sauteed mushrooms, then firmed up and given great texture with TVP (or any meat replacement of your choice). This will make your guests think that they are eating a homemade beef burger. Serve them in a hamburger bun with some melted vegan cheese, ketchup, lettuce, French fries, and dill pickles and you've got yourself an all-American classic!

Make a batch of the patty mixture and freeze them formed into patties but uncooked, and you've got yourself a quick meal after work! These great homemade veggie burgers also hold up on the grill, just brush them on both sides with a little oil before grilling. I recommend chilling them thoroughly first though, and you could cook them on aluminum foil if you have guests who are worried about cross-contamination.

NOTE: I don't add salt at this point, I fry a little of the mixture in a pan and taste it for seasoning first, then add it if needed. There are a lot of strong flavors in this mixture already!

Can I Freeze the Patty Mixture?

Once you have formed the burgers into patties, wrap them tightly in clingfilm and freeze them for upto 8 weeks.

Can I Replace the Mushrooms?

I would say no as they add to the juicy texture of the burgers. You could perhaps try chopped zucchini instead

Can I freeze the cooked Burgers?

You can. Leave them to cool completely, then wrap tightly in clingfilm and freeze for up to 8 weeks.

Try my other easy vegan suppers! 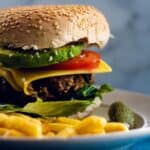