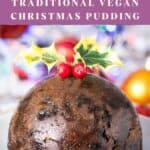 It seems strange to think about Christmas in the summertime, almost as if it's an alien concept. Yet, as soon as the weather starts to cool down, and you see the first tin of biscuits in the shops, that festive feeling starts to grow, as it always day, year after year.

That said, I do find that cooking for Christmas completely discombobulates my routine. I find that I've cooked trays of mince pies, puddings and cakes, but I have nothing to eat for supper! Maybe that's why I also love the detox month of January! Time to rethink the menu then, but in the meantime, I'm going to hide from the gale-force winds outside, and make some cosy food.

I like to get into the festive spirit by making a few of my favorite foods, in November, and of course, I start with Christmas Pud. This version is less sweet than shop-bought but more flavourful.

What is Christmas Pudding?

If you've never had a christmas pudding, you might find yourself firmly in one of two camps: you either love dried fruit or you don't. A traditional Christmas pudding is a steamed pud, packed full of dried fruit, warm spices, diced apples and citrussy zest.

The pudding is usually steamed for several hours, a few weeks ahead of the festivities, wrapped up tightly and kept under the bed, or on top of the wardrobe. Finally, after that short spell of hibernation, it is given a second steaming before being doused in vodka or brandy, a sprig of holly for a hat, and produced to lots of oohs and ahhs from your guests.

Stir up Sunday is the last sunday before the season of advent begins, it's origins from Book of Common Prayer: "Stir up, we beseech thee, O Lord, the wills of thy faithful people".

It is considered the day to make your Christmas puds, bringing in your family members to each give the bowl a stir, making a special wish for the year ahead as they do.

Steep the dried fruit in some brandy and cider for at least 4 hours, but 2-3 days if necessary

Mix the suet with yogurt and brown sugar until amalgamated

Stir in the apple, zest, breadcrumbs and ground almonds

Mix the suet with yogurt and brown sugar until amalgamated

Cover with a layer of tinfoil and then a layer of greaseproof paper. Tie securely with string, and make a small handle so that you can lift the pudding out of the pan easily when cooked.

To steep the fruit

To make the pudding