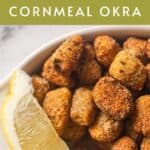 Okra. We don’t care what anyone else says about it, we love the stuff. Its gentle bite, the taste of green iron, the depth it lends to dishes, its beautiful shape that in cross section resembles the lotus root. Why do other people still not see its versatile, good-naturedness?

This recipe uses my spicy cornmeal coating and makes a great starter or appetizer for your New Years eve party or any event where the cook (that's you and me) has time to fry up some delicious nibbles! Try serving alongside my vegan smoked salmon for some conversation starters! If you wanted to go okra crazy, try serving alongside my Indian spiced Akri Bhindi too!

Those spindly, lime green fingers that resemble the stems of thistles but have a delightful fresh taste, have long been vilified in the UK as a vegetable. I blame TV chefs who have a far-reaching influence over the loyal fan base of viewers. All it takes is one thoughtless comment about a vegetable, let's say okra, being slimy and that's it! Unjustified shudders reverberate throughout the whole country at just the mere thought of it. Imagine! A slimy vegetable! Yuk!

This is a great shame because they are readily available and are a good source of vitamins C and B6 and folic acid. Of course, many repulsive things are high in vitamins - and we would rather take a supplement than force something unpleasant down our necks.

But Okra is not unpleasant. It has a dreadful reputation for being mucilaginous - that precise and self-fulfilling word being the key to okras bad reputation. People don't want to eat a dish that might remind them of a bodily discharge and it doesn't help that Okra is also green. But...this quirky trait has yet another health benefit: it helps bind bile toxins, helping the liver to filter out the bad stuff, the fibre within okra helps stabilise the blood sugar levels, and that same fibre also helps out the colon (i.e., by keeping the body 'regular').

Now forget the good stuff and consider the great stuff. Okra tastes delicious. I don't want to sound like the Okra Ambassador but if we can eat Foie Gras - the forcibly engorged liver of another animal - or eat Pork Pies which contain aspic made from a split pigs trotter, why do we have so much trouble eating a tasty, healthy plant?

Okra resembles a long green chilli. It can be pickled, deep fried, used as a thickener in gumbo and other soups or stews (that mucilaginous quality has more than one function). In the Deep South, Okra is considered godlike amongst other vegetables. It is part of their culinary heritage in the same way the potato is to the Irish. It first arrived in New Orleans in the early 1700s and remains - literally - firmly rooted there.
There are hundreds of ways to serve this humble, vitamin-giving vegetable: casseroled, pickled, grilled, smothered and there are another hundred different ways of frying Okra.

If the 'slimy' aspect of Okra really does make you queasy, frying it could change your mind. Okra is best cooked very speedily or slowly, in a casserole. However, you get all the flavour but none of the slime when fried. I recently bought two packs of Okra - which is nearly always to be found in the reduced fresh produce section of our local supermarket - one to be used in Gumbo and the other...."well, it was reduced!"

As a pre-supper appetiser, I sliced the green fingers into centimetre thick rings, doused them in a little seasoned coconut yogurt (unsweetened) and then tossed them in spicy cornmeal mix, seasoned with salt, pepper, paprika and a little cayenne.

The okra is then fried in very hot vegetable oil and served piping hot. And if nothing else is achieved, it would certainly prove a talking point at an informal cocktail party.

Dice your okra and lightly coat in yogurt

Now toss in the cornmeal coating, making sure the okra is thoroughly coated

Fry in hot oil for a couple of minutes until golden brown, then drain on kitchen paper before serving

As with most fried food, it is best eaten on the day cooked.