"We're Ericksons. Of course we're gonna add a Swedish dish or two. You may be thinking this pronouncement is a good way to introduce you to lefse, but no. Apparently lefse is Norwegian, technically, not that a technicality ever stopped me from eating it as a kid, but, you know, I had to point it out.

As a kid, I probably didn't have an appreciation for the boiled potatoes and pickled beets, but I always loved the lefse and nobody questioned the origin then. Who am I to break this tradition?

This vegan lefse recipe comes from my friend Angela Stein in Baraboo. It's her mother's recipe, actually, now veganised. Thanks Angie's Mom!"

Lefse are a traditional Norwegian flatbread, made with mashed potato, buckwheat flour and milk. They are rolled out thinly, then cooked quickly, at high heat, on a griddle or, in my case, a large frying pan. They are traditionally served hot, smeared with butter or jam and cream, and are completely delicious!

Norwegians don't tend to eat Lefse as much these days, preferring to buy them ready made, but Norwegian-American (like my ex father-in-law) families brought different recipes over with them when they first settled in the US. It has become a popular dish to cook with your family during the festive season.

Megan Walhood discusses growing up with the comforting taste of Lefse, here in this article, and it might give you an idea of how important the idea of tradition still is.

How do you make Vegan Lefse?

They are a flatbread, so no yeast is involved. You take boiled potatoes, mash them up, then make a thick dough by adding flour and milk, a little salt and sugar. Roll out balls of the dough to the thickness of a tortilla, and then cook at high heat on a griddle or frying pan (no oil).

The dough is very soft, so you will need to flour your hands and the surface frequently, try to handle the dough as little as possible.

Can I Use Gluten Free Flour in my Lefse?

Yes, feel free to use your favourite gluten-free brand of plain flour! You may need to add more/less flour though.

Try my other easy vegan breads 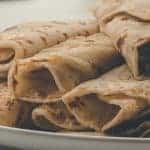